While Derek Chavin sits in a Minnesota jail unable to make his $1.25M bail after incurring second-degree murder charges in the death of George Floyd, he’s got more charges to account for. 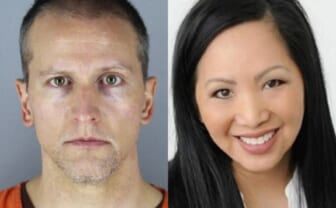 As reported by the Minneapolis Star Tribune, Derek, 46, and his estranged wife, Kellie Chauvin, 45, were charged by summons in Washington County district court in Minnesota with nine felony counts of aiding and abetting taxes, false or fraudulent returns or failing to file returns.

According to the complaint, the couple is accused of underreporting $464,433 in income. Much of it from his side jobs as a security guard and bouncer at various Minnesota nightclubs from 2014 -2019, reported the Tribune.

One of those clubs was El Nuevo Rodeo where he also worked security with Floyd who he is now accused of killing during an arrest. Derek made $96K at that club alone during that time span. The couple should have paid over $21,853 on the underreported income but are now on the hook for $37,868 with interests and penalties.

In his work as a police officer for the Minneapolis Police Department during that time, Derek made between $52 – $72K annually.

He told the Tribune the tax issues were “run of the mill, but it just happens to be the [police officer] sitting in Oak Park [Heights prison]. … The guy owes us money, and I want to collect. I don’t care about his other problems.”

Kellie, a real estate agent who also ran a photography business, says the taxes “got away from her.” Although she filed for divorce from her husband after Floyd’s death, she called him to let him know about the tax issues on June 26, a day after the couple’s house was searched and tax documents were seized.

When Derek suggested she use who they had used before, she said she didn’t want to get his father in trouble as he is an accountant who’d handled their taxes in the last years they did them. Derek’s father told investigators he’d filed tax extensions in previous years but his son and daughter-in-law never followed up.

Kellie is a Hmong-American who emigrated from Laos and married Derek in 2010. They met at the hospital where she worked after he brought in a suspect for a health check.

On Wednesday, she asked that her divorce proceedings be sealed as she and Derek were the recipients of constant harassment.

“The circumstances surrounding Respondent’s incarceration has resulted in rage and violence throughout the community directed at both Petitioner and Respondent,” the divorce filing read.

The couple’s financial information, including one of their Social Security numbers, had been acquired by hackers who tried to steal money out of the couple’s accounts.

Derek remains in jail, awaiting trial on second-degree murder and manslaughter charges in Floyd’s death. As the senior police officer, he kept his knee on Floyd’s neck for over eight minutes until Floyd lost consciousness and later died at a Minnesota hospital.