Ivanka Trump, Jared Kushner earned at least $36 million in outside income in 2019: report

A Washington Post analysis states that their 2019 earnings could range anywhere between $36 million to $157 million. 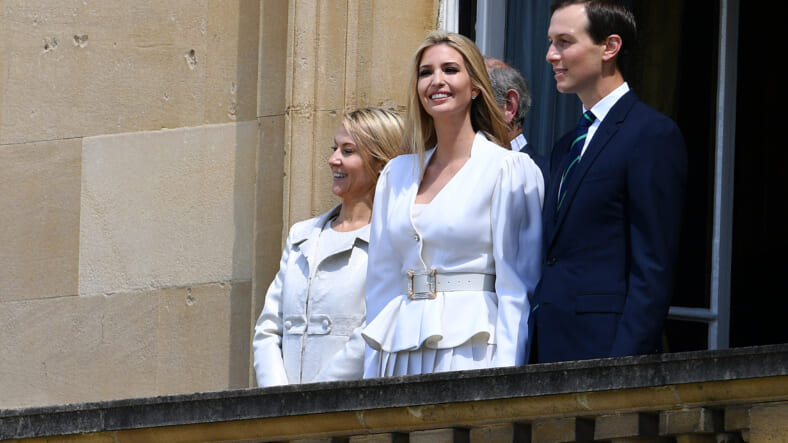 Ivanka Trump and husband Jared Kushner watch from a balcony as US President Donald Trump inspects a Guard of Honour at Buckingham Palace on June 3, 2019 in London, England. (Photo by Jeff J Mitchell/Getty Images)

Ivanka Trump and Jared Kushner, the married advisors to President Donald Trump, earned tens of millions of dollars in outside income last year, according to a report from Washington Post.

A new financial disclosure released Friday indicated that the couple in 2019 brought in more than $36 million, a $7 million increase from the $29 million reported the year prior, from commercial and residential properties.

The exact amount earned, however, is unknown due to the fact that the Office of Government Ethics only requires members of the administration who file such documents to report ranges of assets and liabilities. This is also true for their net worth.

A Washington Post analysis found that their 2019 earnings could range anywhere between $36 million to $157 million.

The $29 million made in 2018 was the lowest amount the White House senior advisors, who wed in 2009, took in since joining Trump’s administration in 2017. That year, according to the disclosures, they collectively made at least $82 million.

Ivanka Trump is one of the president’s multiple children closely connected to his government and political affairs.

Kushner has retained part-ownership of Kushner Companies, a real estate business operated by his family. He refused to sell his stake in the company, much like his father-in-law, who also did not sell off his company after becoming president.

Although Ivanka gave up her jewelry and clothing brand in 2018, after political backlash prompted numerous national retailers to remove her line from shelves, she received nearly $4 million, a fixed annual sum, in 2019 from her father’s Trump International Hotel in Washington, D.C. for the third year in a row.

The family’s continued involvement in Trump International Hotel has been the subject of lawsuits throughout his time in office. ABC News reported that the president was accused of profiting from dignitaries and diplomats staying at the hotel over the years, a violation of the Constitution’s Emoluments Clause.