Demonstrators say that the country's elite class are responsible for the negligence that led to the explosion. 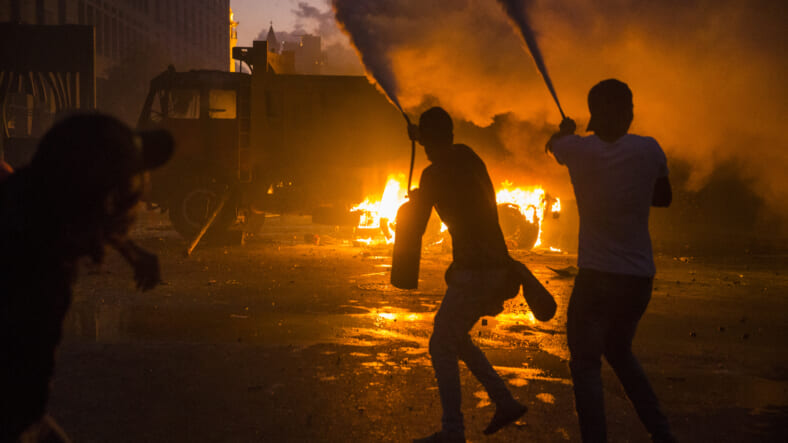 Protesters use fire extinguishers to block protesters’ movements from the Internal Security Forces, not pictured, during a protest at Martyrs Square on August 8, 2020 in Beirut, Lebanon. (Photo by Daniel Carde/Getty Images)

Chaos erupted in Beirut during a clash between protesters and the city authorities.

In response to the country’s massive explosion, there have been demands from anti-government protestors, seeking an early election to vote out the ruling class, Bloomberg reported.

Demonstrators say that the country’s elite class is responsible for the negligence that led to the explosion. Dozens of protesters vandalized the Ministry of Foreign Affairs, Ministry of Energy, and Ministry of Economy and Trade.

On Saturday, during the demonstrations, shots were fired. It was later confirmed that the bullets were shot by police officers. Officers also used rubber bullets and teargas against protesters.

There was a demonstration on parliament square and protesters could be heard screaming anti-government chants.

Demonstrators also burned a portrait of President Michel Aoun, according to Reuters.

Lebanese authorities said 2,750 tonnes of an industrial chemical had been stored for six years at Beirut port without safety measures. That stockpile exploded on Tuesday, killing more than 150 people, injuring thousands and leaving about a quarter of a million people homeless.

“We are staying here. We call on the Lebanese people to occupy all the ministries,” one demonstrator said on a megaphone.

In comparison, 2,300 tonnes of ammonium nitrate detonated aboard a ship, killing 567 people in Texas in 1947. This was reported to be one of the world’s deadliest industrial accidents, according to Reuters.

“Beirut, like Texas, is a wake-up call. We should learn from these catastrophes and make sure they don’t happen again,” Stewart Walker, an associate professor from the school of Forensic, Environmental and Analytical Chemistry at Flinders University, said.