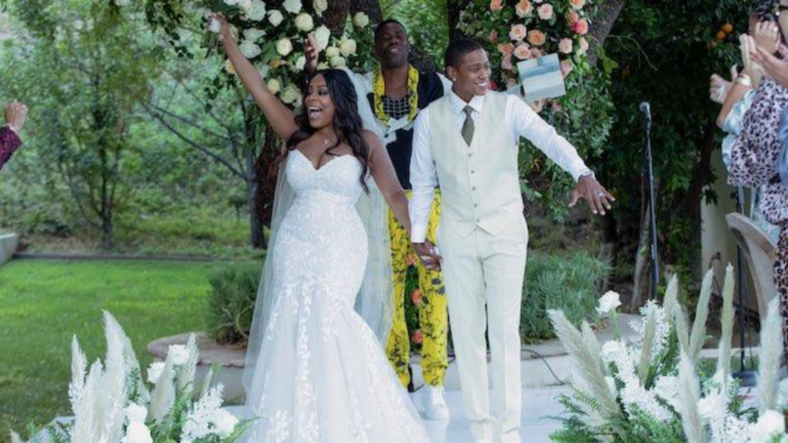 Read More: Niecy Nash to white folks: ‘Don’t call one more Black person and ask them nothing about nothing’

“Mrs. Carol Denise Betts,” the 50-year-old star of Claws reintroduced herself as on Instagram with the hashtag #LoveWins and the rainbow emoji.

theGrio previously reported Nash and her former husband, Jay Tucker, announced their divorce after eight years of marriage in October 2019.

“We believe in the beauty of truth. Always have. Our truth is that in this season of our lives, we are better friends than partners in marriage. Our union was such a gorgeous ride. And as we go our separate ways now, we feel fortunate for the love we share – present tense.”

Her new partner, Jessica Betts, is a musician and cast member of Claws. According to her IMDb, she played the character Nadege during a season 2 episode of the series. The artist shared her own upload of the same photo as her new wife, exclaiming “I got a whole Wife” and using the hashtag #BettsOfBothWorlds.

Along with the outdoor wedding grid upload, Nash took to Instagram Story to feature music from her and Betts as well as another photo of the couple with the hashtag #PlotTwist with the rainbow emoji. The pair have shared images and traded comments on social media, without confirming a romantic relationship.

In February, Betts shared a birthday post to her new wife, not mentioning whether or not the two were a couple, but calling her “a real one.” Back in 2018, she shared how Nash was “anointed and appointed,” sharing behind-the-scenes photos from their shared set.

theGrio wishes a warm congratulations to the newlyweds.