OPINION: James is fashioning himself as a moderate who believes in bipartisanship. The problem is when it comes to the party of Trump, you can’t play it both sides. 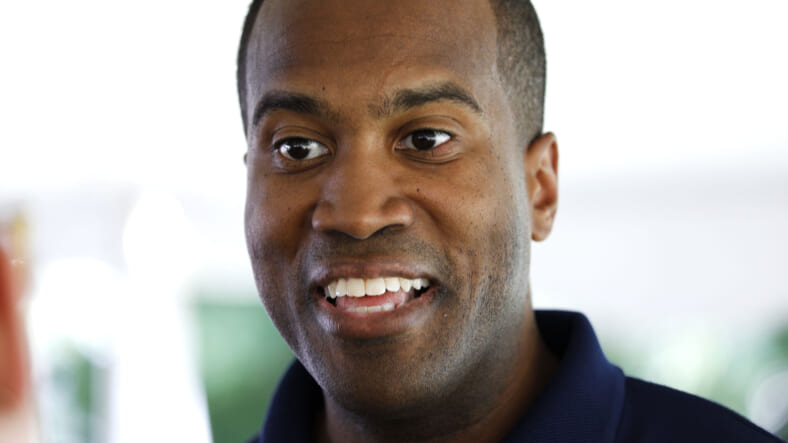 John James is a Black man who has a shot at becoming the next U.S. Senator from the great state of Michigan. But why does he support Trump, but acts like he doesn’t know the man?

James is running against Democratic freshman Senator Gary Peters, in a second run for the office. In 2018, James ran for the state’s other Senate seat, losing to incumbent Democrat Debbie Stabenow.

A businessman and self-proclaimed “job provider,” he has an impressive pedigree on paper — in terms of what white folks who would vote for him may look for in such a person. He is a West Point graduate with two Master’s degrees — one from Penn State and another from the University of Michigan — and he served in the Iraq War.

This tight Senate race is being closely watched because so much is at stake, with Michigan as a battleground state in Democrats’ pursuit of a royal flush with total control of the U.S. Senate, the House of Representatives, and the White House.

Democrats must win four seats to control the Senate, but would only need three if they also win the presidency, in which case a Vice President Kamala Harris would be the tie-breaker. A GOP election bloodbath and a Democratic Senate takeover are on the table and perhaps even imminent.

This was a point Senate majority leader Mitch McConnell almost seemed to concede, as he celebrated his victory of rushing the confirmation of Amy Coney Barrett to the Supreme Court, essentially walking over nearly 230,000 dead bodies from coronavirus to do it.

Peters is favored to win reelection with an 80% chance according to FiveThirtyEight, and Biden has widened his lead over Trump in Michigan, according to recent polling. This would be a nice pickup for the GOP, in a state Trump narrowly won in 2016. If Democrats were to lose this Michigan Senate seat, it would mean finding another seat somewhere else.

A U.S. Senator John James would have some clear policy implications. For example, he is on record opposing the Affordable Care Act and wants it repealed. James also supports the defunding of Planned Parenthood, called abortion “genocide” and said Roe v. Wade should be overturned.

He has been fuzzy, however, on whether he would criminalize abortion and ban the procedure even in the case of rape or incest. This is worth noting, given the lack of access that Black women have to medical and reproductive healthcare, and the disproportionate pregnancy-related deaths they face.

John James faces a dilemma. As a Black person in a white nationalist party who wants power and has to win over the GOP base, what should your stance be on racism and the treatment of Black people? You have one choice. Either go all-in for white folks, or go home.

Daniel Cameron, the attorney general of Kentucky, has shown that being kinfolk does not necessarily translate to being kinfolk. When he decided to use his power to stand up for the police murderers rather than Breonna Taylor and the Black women of America, he showed us who he really is.

Sen. Tim Scott of South Carolina makes his bed every day when he serves as Negro sidekick to his segregationist colleagues, who point to him as proof they don’t have a racist bone in their body.

John James is attempting to fashion himself as a moderate who believes in bipartisanship and claims his independence, and who even sounds reasonable on issues of racism and Black people getting killed by the police in their bed. The problem is we can see through the hypocrisy. You can’t play both sides.

Two years ago, James said he supports Trump 2000%, even as he trashed his president in private. Trump considered nominating James as UN ambassador to replace Nikki Haley. The problem for James is that Trump is extremely unpopular among Democrats and independents in Michigan, which explains his efforts to distance himself from Trump.

James reportedly received thousands of dollars in campaign donations from Ryan D. Kelley, head of the American Patriot Council, and an organizer of the June white militia rally in Lansing, where militias plotted to kidnap — and likely rape and murder — Michigan Gov. Gretchen Whitmer. James is even in a photo posing with Kelly.

The senate candidate has played down his financial ties to Trump Education Secretary Betsy DeVos, who has used her position to destroy civil rights in education. James attended a fundraiser at the home of DeVos’ brother-in-law.

And James tweeted his approval of then-nominee Judge Amy Coney Barrett to the Supreme Court, saying of the handmaid jurist, “Partisanship should take a backseat to the Constitution. Amy Coney Barrett is an accomplished and well-respected legal mind with an objectively brilliant career. I wish her a respectful and dignified hearing.”

But James can’t embrace Trump and a racist party, then try to distance himself from Trump in Trump’s own party. You can’t join a cult on a part-time basis. It doesn’t work like that. And in this case, the GOP is a white supremacist death cult — Jim Jones style. This time, replace the cyanide with COVID-19 and mix it with orange Kool-Aid.

At first, the Republicans didn’t care about the coronavirus deaths when they believed most of the people dying were Black and Brown. Now they all want to catch it and, apparently, that includes John James, who claims he always wears a mask, and “always done everything he can to protect folks who are vulnerable.”

And yet, like his friend Trump, he has been seen many times in public —including with Vice President Mike Pence and Trump B-list celebrity Kid Rock — not wearing a mask.

John James must choose a side. It’s Black America or Trump.