Something is fishy about Daniel Cameron and the Breonna Taylor case

OPINION: Things don't add up when it comes to the Kentucky attorney general, who apparently prefers the warm embrace of white supremacy 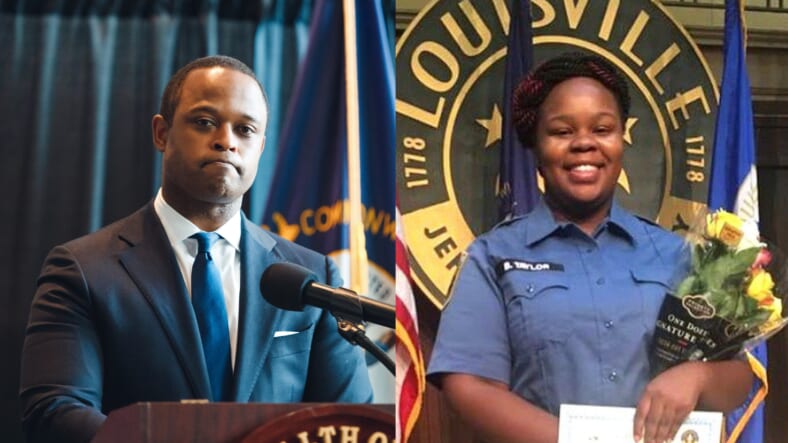 Something just doesn’t add up about Daniel Cameron.

Cameron is the Kentucky attorney general who dragged his feet seeking charges against the police officers who murdered Breonna Taylor, a Black woman, in her home and in her sleep. When the grand jury indicted only one of the four officers — not for murdering Breonna, but for endangering the lives of the white folks next door — we knew something wasn’t smelling right.

But when one of the grand jurors sued Cameron to demand the release of the grand jury transcripts — because the AG reportedly threw the jury under the bus and misrepresented the circumstances surrounding the process — Cameron’s potential handling of the evidence in the case came into question.

A judge granted the anonymous juror the right to speak publicly on the case. And Cameron wanted the grand jury materials to remain sealed, and filed a motion to keep the files secret, arguing it was an issue of safety and the lives of some of the people involved in the case are in danger.

Meanwhile, Breonna Taylor is dead, and the people need to know the details behind the decision to allow these officers to go unscathed, and the role Daniel Cameron played in shutting the doors of justice on the family of Breonna Taylor.

The Black community, people who are fighting in the streets against police violence and lovers of justice need to know the truth. And yet, we may know everything we need about a so-called Black man named Daniel Cameron, who apparently has something to hide behind those fake tears he cried when he announced the grand jury did not seek criminal charges in Taylor’s death. It was then he capped off a career in service to white patriarchy.

We believe that on a good day, Black elected officials are in office to do our bidding and serve our interests. Reform-minded individuals such as New York Attorney General Letitia James in New York, and progressive elected prosecutors such as Cook County State’s Attorney Kim Foxx, St. Louis County Prosecuting Attorney Wesley Bell, St. Louis Circuit Attorney Kim Gardener and others have taken on the system in service of the people.

Traditionally, prosecutors have the discretion to indict or not indict, often with little accountability outside the electoral process. Typically, they have been beholden to the cops, but this is changing for some.

Black people in a position of power have a choice. Will they honor the memories of the countless Black women who have lost their lives to racial violence and police violence and seek justice, or will they uphold White Power? Will they remember the multitude of Black souls who still rest at the bottom of the Atlantic Ocean or some Mississippi swamp, whose lives ended from the hangman’s noose or by massa’s whip, or the paddyrollers, or the officer’s bullet or chokehold, or the four-legged dogs unleashed by two-legged dogs?

Or will they uphold the memories of the victimizers, brutalizers and murderers who took away a Black life without paying a price, because that’s the way the Slave Codes were written?

Daniel Cameron prefers the warm embrace of white supremacy and won’t do anything to make his masters angry, including sending a white man to prison for murdering a Black woman. As Malcolm X said, the House Negro identified himself with the master.

“And it hurt him more for his master to be sick than for him to be sick himself. When the house started burning down, that type of Negro would fight harder to put the master’s house out than the master himself would.”

All our skinfolk ain’t our kinfolk, and Daniel Cameron is exhibit A. Cameron is a Trump supporter who spoke at this year’s Republican National Convention.

“Republicans will never turn a blind eye to unjust acts, but neither will we accept an all-out assault on Western civilization,” Cameron said, calling Black Lives Matter protesters “anarchists [who] mindlessly tear up American cities while attacking police and innocent bystanders.”

When Daniel Cameron ran for Kentucky attorney general, he received the endorsement of the Kentucky Fraternal Order of Police. The FOP is not a friend of Black people, supports Trump and for his “law and order” brutality against Black bodies, and has stood in the way of racial justice and law enforcement reform. Even Black police officers aren’t following the FOP.

More importantly, Daniel Cameron comes from the Mitch McConnell plantation. That’s Senate majority leader Mitch McConnell, who has held up the John Lewis Voting Rights Act of 2020, and has spent so much time packing and stacking the federal courts with 40-year old white nationalists that he has no time to pass a coronavirus relief package.

Cameron was a McConnell Scholar at the University of Louisville, and he served as McConnell’s counsel in the Senate, ramming through the ultra-rightwing theocratic judges, including Supreme Court Justice Neil Gorsuch. Recently, Cameron urged the Senate to quickly confirm U.S. Supreme Court nominee Amy Coney Barrett, who has a problematic record on Black people.

Barrett once ruled that an employer calling a Black employee the N-word was insufficient to show a hostile and abusive work environment. According to the NAACP and the NAACP Legal Defense and Educational Fund, Barrett is illegitimate and poses a threat to civil rights.

Yet, she plays the Black card and claims she wept with her family over the death of George Floyd, including the two adopted children from Haiti apparently held hostage in her home. While Floyd cried for his mother, Barrett and Cameron are in league with a president who kidnaps and imprisons Black and Brown babies and separates them from their parents.

Meanwhile, if we learn that Daniel Cameron stacked the deck against Breonna Taylor to shield her murderers from justice, we shouldn’t be surprised. Because we already know everything we need to know about him.