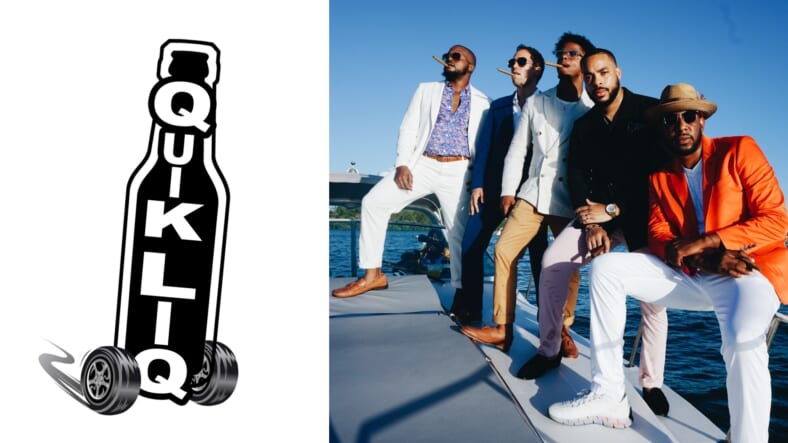 As the world continues to contend with the coronavirus pandemic, many are relying on apps and other digital services to keep the vibes properly curated along with other shopping needs. QuikLiq, a rising player in the delivery space, has the specific aim of easing one’s alcohol angst one delivery at a time.

QuikLiq, which positions itself as the first Black-owned digital alcohol marketplace, is the brainchild of Clark Atlanta University classmates Navarr Grevious and Mikael Pyles. The idea for QuikLiq was first born nine years ago and officially launched in 2018 with the addition of a third co-founder and fellow CAU classmate, Aaron Carter.

Beginning their journey in Florida, the trio is now doing what it can on its end to promote QuikLiq as a front-of-mind choice for the quarantined and shut-in, including all the myriad paths of ease and convenience to boot.

“QuikLiq is essentially a one-stop-shop for all things wines, beers, and spirits,” Pyles explains of the service to theGrio. “The overarching concept of the company is that a customer, with just a click of a button, or a tap on their phone, can have alcohol delivered to their door within 30 to 45 minutes.

The concept isn’t entirely novel as delivery services of this sort have existed for years now, but this is the first that claims itself the first to be founded by Black creators. Pyles shared some of the hurdles the QuikLiq team faced in its early inception and what drove them to their current standing today.

“For us, starting off QuikLiq as three African-American males and HBCU grads, trying to get in and somewhat disrupt the tech industry, especially in connection to alcohol, it was certainly an uphill battle,” Pyles began.

“When we came up with the idea for QuikLiq in 2011, there was nothing like it in the industry at all. We were the first to start developing this concept, but we found very early on that this thing was going to be expensive. Not only is starting a business in most cases costly, but when you’re talking about the fusion of alcohol and tech, it definitely calls for a nice starting nest egg if you will.”

Pyles and his cohorts were plagued by the usual barrier to entry most fledgling businesses face, which is the covering of start-up costs and the like. Adding the unavoidable fact that three Black men going into a predominately white space angling for venture capital firms to support their idea largely unfathomable, the trio defied odds and, in Pyles words, “made it work.”

With its headquarters in Miami Beach, Fla., the area became a valuable market for QuikLiq and they’re now expanding their reach to the western side of the state with the service soon to be active in the Tampa and Clearwater regions. But a move heading north might just give the company the wider footprint it truly seeks.

“In terms of expansion, what we’re most excited about is launching in Atlanta. It’s where all three of the founders first met, so we’re taking it back to the starting point. We’ll be bringing the service to the city in Q1 of 2021,” Pyles shared.

Naturally, any business dealing with adult beverages and delivery has to follow a set of regulatory issues state by state, down to the county in some cases. Pyles explained that Mr. Carter cut his teeth in the alcohol industry, lending his particular brand of expertise in handling the legal side of things regarding sales of alcoholic products by way of their app.

In the age of COVID-19, delivery services have found footing while many brick and mortar businesses reliant on foot traffic have floundered. This stark reality isn’t lost on Pyles and his business partners, proving that innovation happens at times when it’s most needed. Realizing that QuikLiq is expanding its reach in a prime time for such services, Pyles remained sensitive to the realities of the pandemic but hopeful that the service provided brings some ease.

“It’s been such a weird time, it’s been jarring to our society as a whole. We didn’t know what to expect when COVID-19 hit,” he said.

“We were obviously aiming to be proactive as possible by adjusting our hours to follow proper protocols and honor curfews and decreased operating hours. Fortunately for us, QuikLiq is exactly the kind of service many need in a time such as ours. We’re able to safely bring the vibes, if you will, to your doorstep.”

Looking ahead, QuikLiq is still firming up its presence in the southeastern United States with direct aims in offering its service in across the nation in due time.

“This is still very much a startup but with a gritty bootstrap approach. Because of our growth, traction, and visibility in the industry, we are attracting some investor interest, and we’re fielding calls left from right from brand partners who hope to work alongside us,” Pyles said, adding that they intend to keep refining a product that has already shown some measurable success.

“It’s such an exciting time. So as I look towards our future, I truly feel that QuikLiq will soon become a ubiquitous household name. I want us to be mentioned in the space breath as a Grub Hub or Door Dash when one thinks of delivery services. Whether someone is celebrating a promotion at their job, or just having a nice wine-down with your significant other at home, we want QuikLiq to become that convenient option to receive our favorite alcoholic beverages.