EXCLUSIVE: The longtime Ohio congresswoman says her focus will be improving the number of Black homeowners and programs benefiting low-income families 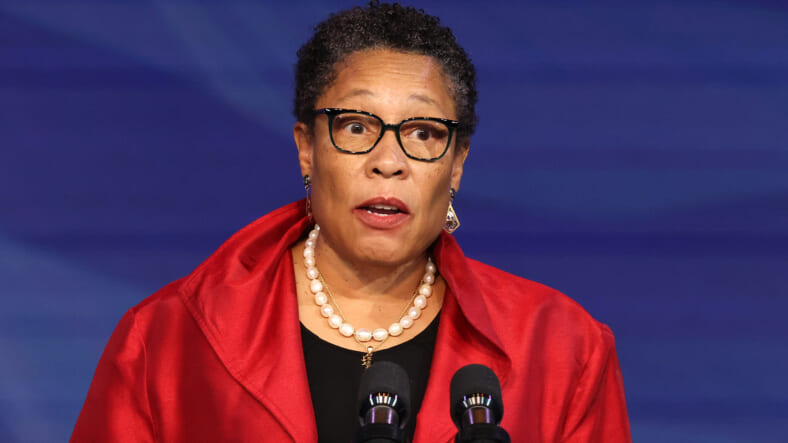 Rep. Marcia Fudge (D-OH) delivers remarks after being introduced as U.S. President-elect Joe Biden’s nominee to head the Department of Housing and Urban Affairs at the Queen Theater on December 11, 2020 in Wilmington, Delaware. (Photo by Chip Somodevilla/Getty Images)
Loading the player...

On the eve of her Senate confirmation hearing, HUD Secretary-designate, Marcia Fudge, took part in a virtual town hall on the first 100 days of the Biden administration, hosted by the NAACP.

Participants in the town hall included Ambassador Susan Rice, Congresswoman Joyce Beatty and NAACP President Derrick Johnson — all of whom cheered Fudge on in support of her Senate confirmation hearing on Thursday.

For the past few weeks, the Ohio congresswoman, who represents the 11th district in Cleveland, had been working the phone trying to find favor with U.S. Senators who will be casting their votes on her fate at the Department of Housing and Urban Development.

As she is hopeful for her senate confirmation in this new historically diverse presidential administration, Fudge says people still must advocate and ask for what they want from any administration.

“It is their responsibility. It really is people’s responsibility to push us. To say ‘I know what you said but I need you to do this. I need to see it. I know what you intended to do but when are you going to do it?’ … Our role is to respond and let them know help is on the way,” said Fudge.

If confirmed as the new HUD secretary, Fudge says her “number one goal is to provide the leadership and the vision that HUD is so sourly lacking,” referencing the last administration’s perceived failures under the former head of the department, then-Secretary Ben Carson.

Fudge affirms her dedication to ensuring equity in her job. One of her top priorities, she said, “will be to make sure every single citizen has a roof over their heads.” She points out that the Black homeownership numbers today in the United States are at the same rate it was in 1968 when the Fair Housing Act was passed.

“Bold action on racial justice is needed at the outset, and fully implementing the Fair Housing Act of 1968 as part of a comprehensive racial equity agenda is essential to expanding opportunity for all Americans,” Nikitra Bailey, vice president for Center for Responsible Lending, tells theGrio.

“President Joe Biden’s executive action to restore fair housing and lending rules give Black and Brown families an opportunity to live free of discrimination and participate fully in the economy. We look forward to working with Rep. Fudge as the next HUD secretary to further these goals.”

But, can this momentous undertaking happen in the midst of COVID-19 and its ill effects? Former Obama administration HUD Secretary Julian Castro tells theGrio, ”Ironically this perhaps is the best chance we have to commit ourselves to greater resources for housing opportunity because Americans from every stripe are feeling the pinch.

“They have felt housing costs rise over the last few years. Many families are on the brink of eviction. So you have a greater swath of Americans than usual that are paying attention to this issue-housing needs, and that provides an opportunity to make the investments right now.”

Castro is hopeful that, with Fudge as HUD Secretary, the Biden housing promises will become a tangible reality as Democrats currently have control of Congress.

“I wish the best for incoming Secretary Fudge. I still feel strongly the success of HUD depends upon the president’s commitment to financially support staffing and housing programs that benefit low-income Americans,” Jackson told theGrio.

The administration is creating an integrated governmental approach for these and other Biden priorities.

Read More: ‘What’s In It For Us?’ podcast talks Biden’s first week in office

“We need to come up with a plan, a public financing plan, a public plan with how we get mortgages out. The mission of HUD is to put people in housing,” said the Ohio congresswoman.

Once confirmed as HUD Secretary, Fudge will step down from her congressional seat she has held since 2008.