Tucker Carlson of Fox News and political commentator Candace Owens were not impressed by the rapper’s performance of “WAP” at the recent Grammys. Carlson said it’s “hard not to conclude” that “cultural vandals” are “intentionally trying to degrade our culture and hurt our children.”

Owens followed up “We are seeing the destruction of American values and American principles and its terrifying, I think parents should be terrified that this is the direction society is headed toward.” 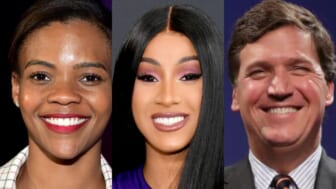 Meanwhile, Cardi B was on Twitter laughing off the comments of her critics.

One Twitter user claimed despite Owens’ disdain for the record, her husband was dancing to the number one song after it released.

“let’s also not forget that candace’s white husband was dancing to WAP on a yacht just a few weeks after it’s release,” wrote a user.

Cardi B and Owens also got into a heated Twitter exchange on Tuesday afternoon.

“And black women should be more like you? After all the fighting for equality and freedom they should be submissive to a white a man after years of abuse & rape  making them a sandwich while pregnant cause in your words “ that’s what a woman should do”? Interesting,” the rapper tweeted. She uploaded a video of Owens making her husband a sandwich while nine months pregnant.

But while Fox News anchors are upset Cardi B is busy helping to bring awareness to Haiti. As previously reported by theGrio, over the last few days celebrities have used their social media accounts to show their support for the #FreeHaiti movement; a hashtag meant to bring visibility to the ongoing standoff between the current Haitian government officials and pro-democracy activists.

According to a report by the Miami Herald, the protests began back in February, after thousands of Haitians took to the streets calling for the resignation of Haitian President Jovenel Moïse. Moïse, who has been backed by the U.S is accused of attempting to establish a dictatorship as the country continues to buckle under the weight of economic hardships and skyrocketing violence rates.

Protestors argue Moïse should’ve stepped down on Feb. 7 of this year, given that his five-year term began in February 2016, following the 2015 presidential election. But his supporters, which including some US lawmakers, counter that he has only served four years in office, as his term didn’t officially begin until 2017.

The discrepancy comes from the fact that the 2015 presidential election was annulled for fraud, prompting a re-election in November 2016 which resulted in another Moïse victory. The Haitian government is now arguing that given the delay, the president’s term didn’t begin until Feb. 7, 2017, giving him an extra year to rule the small island nation.

“We want to end with all of the corruption and impunity. We want to end with the old practices; so many people do not want to give us this chance to decide for ourselves,” said Emmanuela Douyon, an activist with the anti-corruption grassroots group, Nou Pap Dòmi (We Aren’t Sleeping), noting frustrations of those who have felt dismissed in the current crisis plaguing their nation.

“This is what we are defending: the right to decide for ourselves.”