Chris Redd plays Lil Nas X twerking for Christ to make amends for the rapper's new video in which is gives Satan a lap dance.

Queer prodigy and challenger of convention, Lil Nas X, has released yet another work of art that the internet finds both inspiring and inflammatory. It’s no wonder why the video for his new single “MONTERO (Call Me By Your Name)” has caught the attention of Saturday Night Live, a show always obscure in its own right.

On SNL‘s latest episode, Chris Redd plays a cool, unapologetic Lil Nas X in the hot seat on a talk show hosted by none other than Britney Spears, who asks him to make amends for the video, in which he gives Satan a lap dance.

For redemption, and to appease “the religious folks who were mad” about the video where he “ride[s] down a stripper pole to Hell and then twerk[s] on the devil,” he must give a lap dance to God. Chris Redd, as Lil Nas X, gladly obliges in the vein of Nike‘s “just do it” mantra.

In response to the skit, the real Lil Nas X jokingly tweeted: “SNL going to hell.” 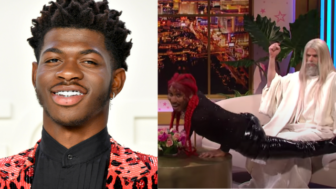 The young rapper, no stranger at all to controversy, recently came under fire by Nike for his “Satan Shoe,” a refurbished Nike Air Max ’97 featuring a blood drop in the midsole and various demonic references designed in collaboration with provocative art collective MSCHF, according to a story by HNHH.

666 pairs were created to sell for the whopping price of $1,018 before Nike was led to sue MSCHF for trademark infringement and misleading consumers to believe the shoe was produced in affiliation with the world-famous footwear brand.

Read More: Nike gets restraining order against Lil Nas X’s ‘Satan Shoes’ after they sell out

He’d intended to give away the 666th pair until Nike thwarted his plan by banning the shoe’s sale. “Sorry guys i’m legally not allowed to give the 666th pair away anymore because of the crying nerds on the internet,” Lil Nas X wrote on Twitter.

“I haven’t been upset until today, i feel like it’s fucked up they have so much power they can get shoes cancelled. freedom of expression gone out the window. but that’s gonna change soon. […] people make customs all the time, it’s never been a problem. nike only stopped the sell of the shoe because a powerful group of people pushed them to do so,” he lamented.