The viral video shows two asking someone to return a phone charger. She then demands that they prove the charger's theirs. 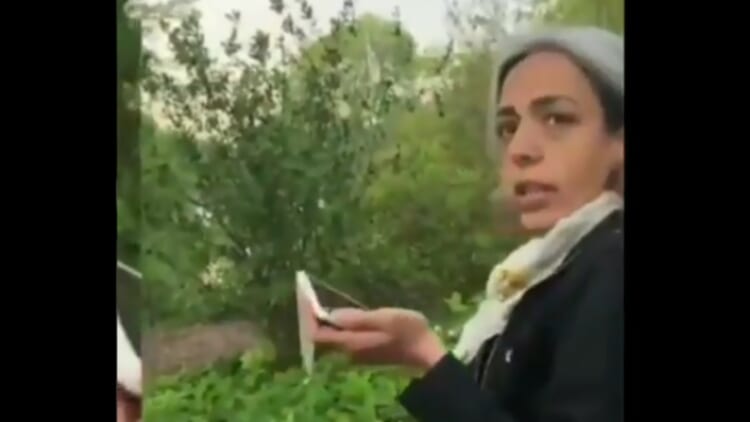 A photo from the now-viral clip shows this woman calling 911 and giving a false account about being attacked by two woman asking her to return a phone charger. (Twitter)
Loading the player...

A white woman has been dubbed the “new Central Park Karen” after she called 911 and lied, saying two Black women were going to beat her.

The viral video reposted on the Twitter page of attorney Benjamin Crump shows Alaina Lambert and Shekeria Thomas asking a white woman to return a phone charger. The woman demands that the young women prove the charger is theirs.

The young women told The Daily Beast they were out enjoying a bike ride when the charger fell out of Thomas’ bag. They said the unidentified woman immediately picked it up and refused to return it. After that, Thomas said, “things escalated quickly.”

“For about a minute or so, I was trying to talk to her reasonably,” Thomas maintained. “But when she called the police, saying that we were threatening and beating her, I was just in disbelief.”

The women shared videos of the incident on TikTok, where the woman is seen on the phone with police accusing the young women of “touching” and “beating” her.

At one point, Lambert and Thomas ask, “Are you racist or something?”

The woman replies, “Yes I am. I pick my race over any race. What’s your problem?”

At the end of one of the videos, the trio is seen approaching horseback officers. The officers spoke to all three women before ultimately returning the charger, according to The Daily Beast.

However, Lambert said she was disappointed that the officers refused to take action, even after she reminded them about the CAREN Act, which passed in San Francisco, which makes it illegal for people to file a false police report based on race.

New York Gov. Andrew Cuomo signed legislation last June making it illegal to place false or racially fueled 911 calls in the wake of Amy Cooper calling police on Black bird watcher Christian Cooper and falsely accusing him of threatening her life. He had asked her to leash her dog in Central Park.

In one of Lambert’s videos, an officer says, ”It isn’t legal to make a false police report, but from what that seems, it seems like she didn’t make a report, that the cops immediately knew that she was just, y’know, not all there.”