LeToya Luckett to star in Fox drama ‘Our Kind of People’

The cast of Fox’s Our Kind of People series continues to round out. Per Deadline, LeToya Luckett has officially joined the cast of the upcoming Fox drama. 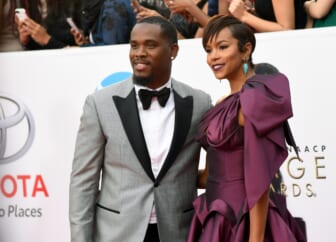 As theGrio has previously reported, Fox is in the middle of casting their highly-anticipated drama series, Our Kind of People, from writer/executive producer Karin Gist of Mixed-ish, and executive producer Lee Daniels.

Based on the popular book “Our Kind of People: Inside America’s Black Upper Class” by the late writer Lawrence Otis Graham, the series takes place in the “the aspirational world of Oak Bluffs on Martha’s Vineyard, a historical stronghold where the rich and powerful Black elite have come to play for more than 50 years.”

Luckett is the latest to join the already stacked cast.

The official synopsis for the series, starring Morris Chestnut and Yaya DaCosta, reads: “Our Kind of People follows strong-willed, single mom Angela Vaughn (DaCosta) as she sets out to reclaim her family’s name and make an impact with her revolutionary haircare line that highlights the innate, natural beauty of black women. But she soon discovers a dark secret about her mother’s past that will turn her world upside-down and shake up this community forever.”

According to the Deadline report, Luckett will portray, “Leah Franklin-Dupont, a strong, confident, elegant businesswoman, who, along with her husband Raymond (Chestnut), sits at the top of the food chain of the wealthy, long-standing Black elite in Martha’s Vineyard. Leah feels the pressure of her position, and a responsibility to give back to the Black community. But when Angela Vaughn (DaCosta) arrives and starts to shake things up and threaten her family’s legacy, Leah makes it her mission to bar Angela from acceptance into The Bluffs before she tears down everything Leah’s family has built.”

Luckett announced her new role on Instagram with a screenshot of the Deadline article.

She wrote in the caption, “✨GLORY TO GOD✨ I AM OVERJOYED!!!!! THANK YOU LORD!!!🙏🏾✨ I can’t tell you how long I’ve worked & prayed for an opportunity like this. My heart is full of pure gratitude.” She continued by thanking the massive creative team behind the project, including Karin Gist, Lee Daniels and more, writing, “Thank you @aprilamking !! I can’t begin to put into words how much I appreciate you! @tasha4realsmith@karingist @leedaniels @ldbcasting@foxtv !! Thank you! Mom @pamluckett @adriajw@prettyposh1908 I owe y’all the world!!! Thank you! I love y’all beyond measure! I’m so excited & ready for this. Let’s Go!!!! #NEVERGIVEUP ✨”