The series features members of Total, Blaque, 3LW and more living under one roof to form a supergroup

After months of anticipation, The Encore–BET’s latest reality series which features some of the greatest girl group members coming together– is officially premiering Wednesday.

The Encore is getting ready to serve vocals, drama, and all of the nostalgia when it premieres tonight. From the mind of Carlos King (whose credits include executive producer of The Real Housewives of Atlanta, Love and Marriage: Huntsville, and more), the series features Pamela Long from Total, Shamari DeVoe from Blaque, Aubrey O’Day from Danity Kane, Nivea, Irish and LeMisha Grinstead from 702, Kiely Williams of 3LW and The Cheetah Girls and Felisha and Fallon King from Cherish coming together to form the ultimate super-group.

With 30 days to live in a house together and record an album, the series is set to be must-watch television. Here are 5 reasons to tune in to the highly anticipated series: 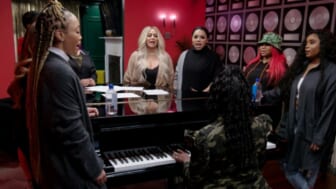 In the first few weeks of quarantine, an old clip from the unreleased pilot of The Encore made its way online, and immediately went viral, which features an exchange between Kiely Williams and Farrah Franklin formerly of Destiny’s Child. Actress Gabrielle Union and host of The View Sunny Hostin tweeted out the video begging for the show to be produced and well, their prayers were answered.

Carlos King tweeted out the news and personally thanked them when the series was picked up, writing, “We did it, Joe! The GIRL GROUP SHOW I created 7 yrs ago is FINALLY coming and I’m so thrilled! This one is a MUST SEE and thank you @itsgabrielleu @sunny @MatthewACherry for demanding this show to see the light of the day! Series premieres Wednesday, June 9th at 10/9c on BET.”

New music to look forward to

The goal of the series? By the end of the 30 days, the women will have a brand new album, making it an exciting experience for fans to tune into their process. Speaking directly to theGrio, Fallon King shared, “fans should be really excited for the music!” While no songs have dropped yet, be on the lookout for some dope music from these music queens.

…with a dash of The Real World

In addition to the creative aspect of recording, singing and dancing together, the women will be living together under one roof. With new and old relationships, the group promises that there is a lot of “passion” in the house, including some expected dramatic moments. Williams teased while chatting with theGrio that there will be “plenty of drama,” as well as passionate moments from all of the women.

“We have two sets of sisters in the house,” Williams shared with TheGrio. “We have two sets of Gemini sisters!” Williams, of course, is referring to Felisha and Fallon King and Irish and LeMisha Grinstead, which makes for an interesting dynamic in a group of nine women. Still, that doesn’t mean the sisters always have each other’s back. Felisha teased that her and her sister “don’t always see eye to eye” in the series, and that fans should expect to see their sister dynamic.

As the teaser for the series says, “this is a second chance” for these women. Above the drama and intense time constraint, viewers will be able to see established and successful women getting one more shot, coming together with their talents to reintroduce themselves in a brand new way.

BET Presents: The Encore premieres Wednesday, June 9 at 10 PM ET/PT on BET and BET Her.