A search for Tulsa Race Massacre victims continues to reveal new findings in Oaklawn Cemetery, most recently leading to the discovery of new coffins.

According to officials, a total of 27 coffins have now been found in Oaklawn Cemetery, per the New York Times.

“We have numbered burials in the mass grave feature,” Stackelbeck said in the news conference. “We’ve uncovered 15 beyond the 12 uncovered in October.”

The race riots erupted on May 31 and June 1 in 1921, when a white mob killed an estimated 300 people and wounded 800 while burning 30 blocks of Black-owned businesses and homes and neighborhood churches in the Greenwood neighborhood, also known as “Black Wall Street.” Planes were even used to drop projectiles on the area, burning it to the ground, theGrio reported. 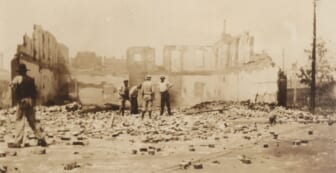 Also Read:
‘Tulsa: The Fire and the Forgotten’ pays respect to lives lost

According to Stackelbeck, it is unclear to researchers whether or not the burials are connected to victims from the Tulsa Race Massacre, Tulsa World reported. But if they are connected, Stackelbeck said that connection will increase the number of people who died from May 31-June 1, 1921 by at least nine.

The excavation process continues with new layers and techniques.

“We’ll have to be extremely careful,” shared Stackelbeck during the news conference. “Up to this point, the work we’ve been doing has been to remove the (top layers of dirt) on top of the coffins. Now we’re doing hand excavation, using smaller hand tools to remove the soil from the top of and then around the skeletal remains contained in those coffins.”

Phoebe Stubblefield, a forensic anthropologist from the University of Florida, is part of the research team and shared that there may be circumstantial evidence that could reveal new findings, the Times reported. This includes signs of ‘traumatic injury’ or the ‘presence of bullet fragments,’ which would propose recovered remains are connected to victims of the Tulsa Race Massacre.

She shared this in a 1921 Mass Graves Investigation: Public Oversight Committee meeting held in March.

The Oversight Committee is comprised of descendants of the Tulsa Race Massacre and leaders in Tulsa’s African-American community. A team of historians and scholars were also assembled to provide historical context for the work being accomplished and document the significance of this important work.”

While there are new discoveries coming to fruition, it is still unclear if researchers will be able to link the actual identifications of the bodies, according to the Times.

Plans on moving forward are still being discussed, officials say. Kavin Ross, who serves as the chair of the oversight committee, explained how Tulsa community members have requested that remains belonging to victims be reburied in Greenwood or a memorial park. According to the Times, this was actually a recommendation made by the state Tulsa Race Riot Commission two decades ago.

Officials say they are out to find remains of any victims of the massacre and intend to continue this process in and beyond Oaklawn Cemetery.