What the Democratic mayoral primary could mean for Black New Yorkers

OPINION: Tuesday's Democratic mayoral primary will prove to be the most consequential yet for Black New Yorkers across the city

The last time that Black New Yorkers decided a groundbreaking mayoral election was in 1989. At the time, crime (influenced by the crack epidemic in the city) was a rising concern for voters. Tasked to decide whether they would part ways with the incumbent mayor, Ed Koch, voters opted for a change in leadership by electing David Dinkins to lead City Hall — making him the first Black Mayor in New York City’s history.

For some Black New Yorkers, crime, economic suffering, and the state of policing in the city today are lingering remnants of the very issues that they voted on in that historic election.

According to NPR, shootings in the city are up 77 percent (as of June 11, 2021). Furthermore, the richest 5 percent of New York families now receive nearly 25 percent of the city’s total income, more than the bottom 60 percent combined. Tragically, New York City law enforcement has been involved in hundreds of police-involved murders, including the horrific killing of Eric Garner.

These issues impact Black New Yorkers disproportionately, and ultimately, whoever wins Tuesday’s race will be charged to prioritize the welfare of Black New Yorkers into the November general election, and likely into an elected term. 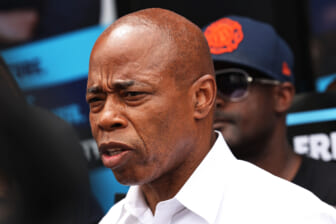 This is the very reason why, according to Reverend Conrad Tillard, a religious and social justice leader in the city, the time is now for Black New Yorkers to leverage their political capital in today’s election.

“Black political power is waning in this city, if we don’t do it now we might not have time in 4-8 years,” Rev. Tillard said.

Each of the candidates on Tuesday’s ballot offer their own appeal to improving life in the city for Black New Yorkers. Eric Adams, a leading candidate, and retired police enforcement officer, has urged Black voters to recognize the overall need for continued police funding in the city, even though there is a desperate need for reform.

When asked about his support, and often defense, of the city’s police force, Adams stated that, “People want to classify me, but because I’m complicated, it’s difficult to put me in a box. I support closing Rikers (Island jail), but also support closing the pipeline that feeds Rikers.”

Some of the other leading candidates, such as Maya Wiley and Dianne Morales (one of whom could become the city’s first Black woman mayor) have embraced liberal attitudes about handling the issue with policing in New York City, such as pledging to shift resources away from the police, if elected. Wiley has also criticized the embrace of oppressive policing tactics by some of the candidates, such as Adams’ proposal to bring back stop-and-frisk policing and a plainclothes anti-crime units.

McGuire, Adams, Morales, or Wiley could fulfill the legacy of Black leadership in the city’s top position as started by Dinkins in 1989. Non-Black candidates, however, have not escaped having to address the role that race plays in the election.

Adams cited a recent, budding alliance between candidates Andrew Yang and Kathryn Garcia as racially motivated. According to him, it is aimed at preventing a “person of color” from winning the race.

“For them (Yang and Garcia) to come together like they are doing in the last three days, they’re saying we can’t trust a person of color to be the mayor of the City of New York when this city is overwhelmingly people of color,” Adams said in a press conference. At a separate news conference, Yang responded, “I would tell Eric Adams that I’ve been Asian my entire life.” 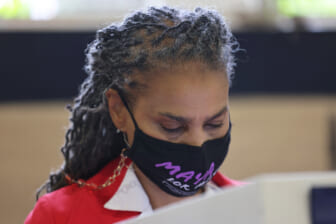 Despite the in-fighting that has occurred among candidates within the race, Black New Yorkers in Tuesday’s primary will make the ultimate decision about which Democrat is most fit to lead the city through its most transformative period yet.

Outgoing Mayor Bill DeBlasio was propelled into leadership with heavy support of Black New Yorkers, across all boroughs, according to an analysis done by the CUNY Graduate Center. Recent polling has shown that likely patterns will re-emerge in Tuesday’s election, as at least one third of the electorate is expected to be Black.

Voting will take place at polls across the city from 6 a.m. to 9 p.m. New York City voters can check their polling place on the Board of Elections website. Voters will select their choices through the city’s newly adopted, ranked-choice voting system, which allows each person to choose up to five candidates, ranking them in order of preference.

Voters who experience issues or unfair treatment at the polls are encouraged to reach out to 866-OUR-VOTE.