"We hear you. I hear you and want to be clear that we are in the process of renaming," Jordan said of the culturally significant brand name J’Ouvert

In an Instagram post Wednesday morning, actor Michael B. Jordan apologized for his rum brand name, which was called out for cultural appropriation.

As theGrio previously reported, Jordan found himself in some hot water earlier this week. The successful entertainer recently launched his new rum brand, J’Ouvert, which was reportedly inspired by the Carnival event held in Trinidad and Tobago of the same name. When Jordan attempted to trademark the culturally significant name, he was called out by some vocal users on social media.

Now, the actor is stepping back from the name, issuing an official public apology after the outrage.

The Creed actor shared in his Instagram story, “I just wanna say on behalf of myself & my partners, our intention was never to offend or hurt a culture (we love & respect) & hoped to celebrate & shine a positive light on…Last few days has been a lot of listening. A lot of learning & engaging in countless community conversations …”

The reaction to the name of his rum brand was certainly widespread, with plenty of fans and social media users expressing their disappointment in Jordan as pictures of the rum’s packaging surfaced online. Rapper Nicki Minaj even chimed in on the controversy in a post on her official Instagram page on Tuesday.

Sharing a photo of a viral Instagram comments detailing the origins of the word J’Ouvert, the “I Get Crazy” rapper wrote in the caption, “I’m sure MBJ didn’t intentionally do anything he thought Caribbean ppl would find offensive— but now that you are aware, change the name & continue to flourish & prosper. 🙏🏾🇹🇹 #jouvert.” 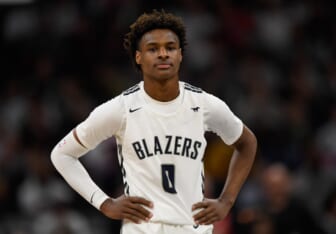 As theGrio reported, the outrage led to an official petition to stop Jordan from trademarking J’Ouvert. As of today, it soared past its initial goal of 10,000 signatures and is now on its way to 15,000.