Frances Tiafoe upsets Tsitsipas to win 1st round of Wimbledon

"I feel like I always play really good tennis against the top guys," Tiafoe said.

Third seed Stefanos Tsitsipas was booted out of Wimbledon in the first round on Monday after suffering a 6-4, 6-4, 6-3 defeat to America’s Frances Tiafoe.

Tiafoe, ranked 57th in the world, had been 0-11 previously against players ranked in the top five. The son of Sierra Leone immigrants secured the biggest win of his career on Monday, with the BBC describing him as potentially the “best of the tournament.”

For Tiafoe, whose father fled the civil war in Sierra Leone and uprooted his family to America –specifically Maryland–, his humbling beginnings continue to fuel his hunger to be the best in the sport.

“In the early years of my career, I had such an urgency to get to the top and make real money. Now I want to get myself back to a higher ranking I know I can play. I’m happy with what I’ve achieved but there’s a lot more to do,” he said in a recent interview with the UK Independent. 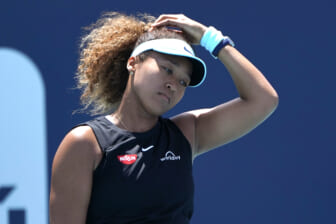 Tiafoe, 23, who has been praised by LeBron James and was once represented by Jay-Z’s RocNation, has spoken of his admiration for Serena Williams. Her G.O.A.T. status has inspired him to want to be a role model for people of color around the world.

“That’s what it’s all about,” he said. “Without the Williams sisters, there is no Naomi Osaka, no Coco Gauff, no Sloane Stephens, no Madison Keys point blank. They put people of color in the position to believe they can do it as the underdog. I want to be that guy for the men’s side. I want to be one of the guys who can put two weeks together and win a slam. It doesn’t matter how small or big your platform is, everyone has people who want to be like them. To be that guy, to inspire them, to be there and pick up the phone when they call, representation is everything.”

Meanwhile, Williams announced over the weekend that she will not go to the Tokyo Olympics, but did not want to say why during her pre-Wimbledon video conference with reporters Sunday, theGrio reported.

“I’m actually not on the Olympic list. … Not that I’m aware of. If so, then I shouldn’t be on it,” Williams said.

Williams, 39, has won four gold medals at past Summer Games for the United States: in both singles and doubles at the 2012 London Olympics — which held the tennis competition at the All England Club — and in doubles at the 2000 Sydney Olympics and 2008 Beijing Olympics.

All of her doubles golds were won with her older sister, Venus Williams, as her partner.

Days before facing Tsitsipas at Wimbledon this week, Tiafoe said the match is the kind “I get up for.” 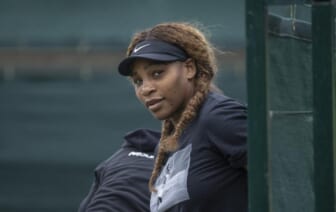 “He’s special, he’s got all the shots, he works hard and has a good team but I’m excited for it,” Tiafoe said of Tsitsipas. “It’s the kind of match I get up for. I feel like I always play really good tennis against the top guys. I’ve made upsets like this before and, if not, I’ve definitely tested guys and put myself in positions to win. I’m going to back myself but I know it’s going to be tough.”

Tiafoe’s victory comes two weeks after Tsitsipas was defeated by Novak Djokovic in the French Open final. It’s worth noting that moments before the match, Tsitsipas’ beloved grandmother died.

“She played an important part in my life,” Tsitsipas said at the time, as reported by The Guardian.

“She was really involved, [through] my father [and coach, Apostolos]. Recently, she wasn’t feeling very well and I’m really sad what happened to her,” he continued.

“You know, there’s a reason behind everything, and I’m sure she’s with us every single day, despite her absence from life. But I’m really excited for the next part of the journey. I really want to make her proud and I really want to dedicate most of my future success to her. She had an important and a big role in my upbringing and the person I am today.”