“God brought you back the first time. Play if you want, different results," Thompson says after Odom calls Kardashian a "hottie"

Thompson and Kardashian called it quits in June but it appears he’s still thirsting over his baby mama, as he was quick to clap back at Odom. The Boston Celtics baller warned the former Laker’s star, “God brought you back the first time. Play if you want, different results ??‍♂️??‍♂️,” Thompson wrote tagging Odom.

His response appears to be in reference to the near-fatal overdose that Odom suffered in 2015.

The comments were left under Kardashian’s July 9 Instagram photo of herself in a bikini, standing underneath an outdoor shower. Thompson, who shares a 3-year-old daughter, True, with the Keeping Up With the Kardashians star, also reacted to the post in a separate comment with several drooling faces emojis, “❤️❤️??.”

Odom and Kardashian married in 2009 and officially divorced in 2016. Khloé and Thompson broke up last month amid rumors that he cheated on her, again.

“They’re getting along. There is no drama,” a source told Page Six in June, adding that “everything is amicable, and they are on the same page with co-parenting.”

According to the insider, the couple split shortly after an Instagram model, Sydney Chase, claimed in April that she hooked up with the Thompson earlier this year.

“It was a peek-a-boo d–k, but, baby, it was good,” Chase claimed on the “No Jumper” podcast when asked about Thompson’s “uncut” penis.

“It happened, and then I found out he was not single, and I cut him off,” Chase said.

“The last time we had contact — besides when he messaged me after finding out about the interview, it was the day after his daughter’s birthday party,” she shared.

Kardashian threw an elaborate Disney-themed birthday party for her daughter in April.

Thompson, meanwhile, has been accused of cheating on Kardashian with her sister’s former bestie, Jordyn Woods, which she has denied. In 2019, his other baby momma, Jordan Craig, claimed he cheated with her while Kardashian was pregnant with True.

Thompson denied the cheating allegations and took to social media to address them, People reported.

“I have spent the last few months training for my upcoming NBA season and making sure that I am in the best shape possible,” he wrote in a tweet.

“I have not been on vacations at all this summer and the current rumors spreading are 100% false,” he added.

Thompson also set the record straight about his status when he met Khloe, saying: “Also, when I met Khloe I was SINGLE,” Thompson tweeted.

“The negative comments that are constantly being directed towards her are unnecessary. She does not deserve all this backlash for my wrong doings,” he added. 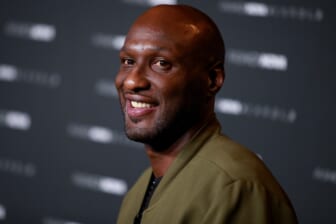 Kardashian appeared to respond to the cheating allegations involving Chase with a cryptic quote on social media that said, “People who don’t hesitate to share a kind word or do a good deed to brighten someone else’s day are the best kind of people.”

Following their breakup, Thompson has reportedly been spotted out and about with a bevy of beauties while at the same time stalking Kardashian’s social media accounts, and fans are less than impressed with his commentary. Per Yahoo, one follower replied to his comments under her posts, “Why are you trying to defend something you weren’t trying to keep sacred when you had it?” Another added, “This man really has no ounce of shame…. Please stop embarrassing her.”

Following Thompson’s warning to Odom, Kardashian seemingly responded with a quote she shared on social media. As reported by Yahoo, she wrote: “Remember, most of your stress comes from the way you respond, not the way your life is. Adjust your attitude. Change how you see things. Look for the good in all situations. Take the lesson and find new opportunities to grow. Let all the extra stress, worrying, and overthinking go.”