Naomi Osaka mourns Kobe Bryant in Netflix doc: ‘Never have the chance to talk to him again’

"It's so amazing how one person can, like, touch the hearts of so many people. I've been walking around and there's so many people with Bryant jerseys on," Osaka says of the late Bryant.

Eighteen months after his death, fans finally get to hear how Naomi Osaka has dealt with the death of her friend and mentor, Kobe Bryant.

On July 16, Netflix will begin streaming a three-part docuseries, Naomi Osaka: Playing By Her Own Rules, which documents the tennis champion’s life specifically during the two years following her 2018 U.S. Open victory over Serena Williams.

Viewers may be particularly fascinated by a clip from the second episode in which the usually guarded 23-year-old has a candid moment about what her grieving process has been like following the news of Bryant’s tragic death. 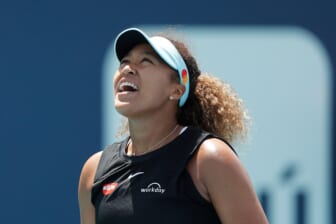 The episode includes a selfie video recorded on Jan. 27, 2020, just one day after the announcement of the passing of the NBA icon in a helicopter crash alongside his 13-year-old daughter, Gianna, and seven others passengers.

The two athletes met back in met in June 2019 and in the clip, an emotional Osaka talks about Bryant’s undeniable influence.

“It’s so amazing how one person can, like, touch the hearts of so many people. I’ve been walking around and there’s so many people with Bryant jerseys on,” she explained in the self-shot footage.

“When I talked to him, I felt so similar to him. Like the way he was talking, the way he would describe how, I don’t know, he would do things to get under his opponents’ skin or whatever. I was like, ‘That’s literally what I do.’ So I’m feeling like I let him down, like, I’m supposed to carry on his mentality in tennis and here I am like, having what … I haven’t won a Grand Slam. Like, I’m losing matches because I’m mentally weak, and he’s … that’s so uncharacteristic of him,” confessed Osaka.

At the time of the clip, she was unable to defend her 2019 title because three days earlier on Jan. 24, 2020, she’d lost to American Coco Gauff in the third round of the Australian Open. 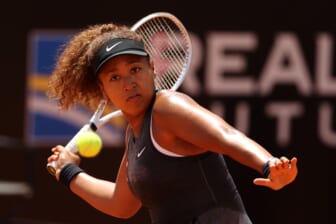 “We’re having all these talks and I’m not even doing what we’re talking about. So it’s like I’m just gonna text him again, like, ‘How do you heal with this situation?’ And then I didn’t text him that ’cause I didn’t wanna feel like a loser, and now I’ll never have the chance to talk to him again. I don’t know, like wow,” she continued tearfully.

Osaka’s coach, Wim Fissette, also shares his own insights about her reaction to Bryant’s death, opining that her grief over the loss later impacted her performance at the 2020 Fed Cup qualifier against Sara Sorribes Tormo on Feb. 7, 2020.

“The death of Kobe was a real thing that upset her. They were close,” he noted, explaining why Osaka broke down in tears after losing to Tormo.

“It’s really so tough because as a coach, you wanna go to her, speak to her, ask her, tell her things just to help her because she was like … Yeah it was very sad,” he added. “Very sad to see her.”