The pop star's new single samples Aaliyah's "One in a Million" while also paying homage to her in the video's choreography and fashion.

Normani is back, and she’s breaking the internet! The pop star dropped her new, NSFW music video with Cardi B, and Black Twitter can’t seem to get enough of it.

It’s been two years since Normani’s last single, “Motivation,” dropped. An ode to early-2000s’ music clips, the singer was nominated for an MTV Video Music Award for best choreography, and she even performed it at the 2019 VMAs. Since then, while sites like Glamour dubbed her “Queen of Pop,” the former member of Fifth Harmony went relatively silent, leaving fans wondering when she would finally drop an album. 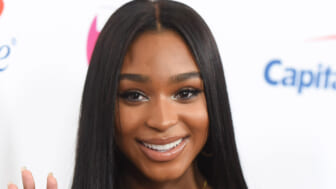 Normani delivered for her patient fans Thursday night. She dropped the music video for her brand-new song, “Wild Side,” which features rapstress Cardi B, and followers of both are going wild with praise.

The super-sexy “Wild Side” features several different fashion looks, intense choreography and is a catchy song just in time for summer heat. Normani tweeted out her excitement on Thursday night in anticipation of its video dropping, interacting with her excited fans.

As it premiered, she shared photos of her and Cardi from the video shoot, writing, “i am crying.”

Academy Award-winning actress Halle Berry was among those on Twitter celebrating the new video, writing, “Normani. Cardi B. That’s the tweet. YES LADIES.” TV veteran Jackée Harry also tweeted out some love for Normani, opining, “Facts: @Normani is worth the wait.”

Normani engaged in a Twitter love fest with fellow music artist Lil Nas X, who wrote in a tweet to the singer: “@Normani that was the best video i have ever seen in my entire life. i am in awww. i am inspired!”

Responding to the “Call Me By Your Name” rapper, she wrote, “no but your BET performance…f**king icon. I love you so much !!!!!!! what is life ahhhh thank you.” Nas X then responded again, calling Normani “an entire star.”

Instantly finding herself trending on Twitter, Normani was still one of the hottest topics on the social media app on Friday morning. Also trending beside her is late pop star Aaliyah. Listeners instantly caught on that “Wild Side” samples her 1996 hit song, “One in a Million,” and anyone viewing its NSFW music video had to have immediately noticed Sean Bankhead‘s Aaliyah-inspired choreography and fashions akin to her style.

Tanu Muino, who also directed Cardi B’s “Up” video, worked his visual magic on “Wild Side.”

One tweet that now has over 1,000 retweets reads: “One In A Million is a timeless record. It will stand the test of time. Aaliyah forever changed the R&B with this one. Everyone tell Normani thank you for reminding y’all who Babygirl is.”

Producer Amorphous — who went viral mashing up hit songs together, including some Aaliyah tunes — shared, “I AM LEGITIMATELY IN TEARS. AALIYAH IS SMILING DOWN SO HARD. ATE THAT!!! @normani.”