In a recent appearance on The Tonight Show Starring Jimmy Fallon, Joshua Jackson revealed Jodie Turner-Smith proposed to him on New Year’s Eve while in Nicaragua. 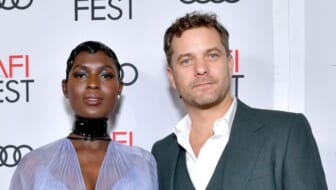 Turner-Smith and Jackson are one of the biggest couples in Hollywood.

The actors have been incredibly open in their relationship, from detailing their decision to raise their children outside of the U.S. to pandemic anxiety ahead of having their child. Jackson recently sat down with Jimmy Fallon and revealed even more about their relationship, including when and how Turner-Smith popped the question.

Fallon asked Jackson in the interview, “Did you guys always know that you were destined, that you were going to get married?” Jackson responded, “Ah, I knew the moment she asked me…on New Year’s Eve, we were in Nicaragua, it was very beautiful and incredibly romantic. We were walking down the beach and she asked me to marry her!”

When asked if he knew if she was going to ask, Jackson explained, “I did not know, but she was quite adamant and she was right. This is the best choice I ever made,” as he showed off his wedding ring to the studio audience.

Jackson also opened up about fatherhood, sharing that the experience has been “pretty excellent.” The couple welcomed a daughter, Janie, in 2020. He joked, “It’s amazing how many pictures you can take of one baby…like breakfast, she gets pasta sauce on her face…we need ten thousand of those!”

Fallon also presented a picture of Turner-Smith rocking a shirt with a vintage picture of Jackson playing Pacey in the teen series Dawson’s Creek. He shared in the interview, “This popped up like eight or nine months into our relationship. I’m not exactly sure who the Amazon seller is that keeps the Pacey shirts on hand but she is their core customer.”

As theGrio previously reported, Jackson had opened up to Buzzfeed News’ AM to DM last year while Turner-Smith was pregnant. He shared at the time, “I’ve never been a parent before, so I’m not quite sure how much of this is just first baby anxiety and how much of this is pandemic anxiety.”

If the interview is any indication, Jackson is very much enjoying his new role as a dad.

Check out Jackson’s full interview with Fallon below: