"We still love him because he’s our uncle, but can we forgive him?" an anguished family member asked.

The Wisconsin man who killed five family members — four teens and one adult, has been sentenced to 205 years in prison.

Christopher P. Stokes, 44, called 911 twice within six minutes on April 27, 2020, to report that he had “just massacred my whole family” with a shotgun.

An officer who arrived at the scene found Stokes sitting outside the house steps. When the cop asked if he heard gunshots, Stokes replied, “Yeah, I didn’t hear them, I did them.”

Police found the bodies of five people in the home and a 12-gauge Mossberg shotgun on the floor of a bedroom.

In addition to the reckless homicide charges, Stokes, who has a history of domestic violence convictions and other crimes and was set on fire by a sibling as a teen according to his lawyer, was also charged with one count of possessing a firearm.

Stokes pleaded guilty to the charges in June, and on Tuesday he received 40 years behind bars for each of the five victims, plus another five years for illegally possessing a gun as a convicted felon –205 years total, according to ABC News.

Prior to sentencing, Stokes expressed remorse and made clear that he deserved to be severely punished for the crime.

“Don’t know what in the world came over me. Woke up and just had blood on my mind. Something just wasn’t going right. It was, I don’t know,” Stokes said, WITI reports. “The reality is, I can’t take it back. I did the ultimate sin… I deserve to be locked up. I deserve everything I get. I’m not asking for no leniency or anything like that. I deserve it. No one in the world should have done what I did.”

Police say Stokes initially told police that his family was ‘f—with him.’

During the sentencing hearing, Stokes’ sister, Lannie Stokes, had one simple question for her brother: Why?

There were some warning signs, The Journal-Sentinel reports. A month before the murders, Stokes sought and was receiving therapy for anger issues and for hearing voices, his lawyer, Nathan Opland-Dobs, said, which changed from in-person to over the phone due to the pandemic.

Lannie said she knew something was wrong but her brother wouldn’t communicate with her.

“Losing those many people at one time, including him, hate is a bad word, but we really do hate him for that,” said his niece, Rosemary Turner. “We still love him because he’s our uncle, but can we forgive him for what he did? No, we can’t. Do we understand it? No, we don’t. It’s like, we just got to take it a day at a time.”

She added, “We can’t bring them back. We’re still left with broken hearts, so just got to stick together.”

Although Stokes was evaluated for an NGI, or not guilty by reason of insanity or mental impairment plea, neither doctor who interviewed him would recommend it. 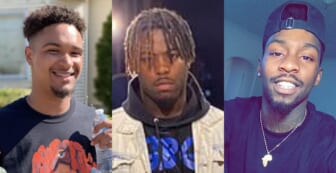 His attorney told the Journal Sentinel that his client’s actions were “not something a sane person, a normal person, would do.”