4 dead, 2 injured after a string of PG County shootings

The events mark the 10th deadly shooting in the affluent, predominantly Black county in 10 days

Officers arrived in the 1900 block of Village Green Drive just before 11 p.m. Friday night to find three women with gunshot wounds. One woman was pronounced dead on the scene, and another was rushed to the hospital where she was later pronounced dead, per the PG County Police Department on Twitter. The third sustained critical injuries.

Later at approximately 11:30, police responded to another shooting roughly one mile away in the 1800 block of Ryderwood Court. Officers found a man with gunshot wounds who, after being rushed to the hospital, was later pronounced dead.

A third shooting occurred ten miles away at roughly 3:30 Saturday morning in the 6700 block of 22nd place. Police say officers found a man and a woman with gunshot wounds inside of a van.

The man was pronounced dead on the scene, and the woman sustained critical injuries.

Police said detectives are investigating the three incidents separately, but are looking to establish connections among them. No suspects or motives have been identified thus far.

These events bring the total to 10 deadly shootings in the 10 days between July 21 and July 31 in PG County, per WUSA9. 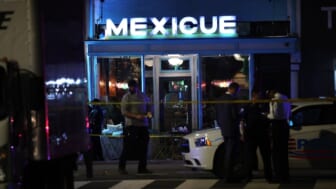 No arrests have been made thus far for any of the shootings, WUSA9 reports. Police are asking anyone with information to contact Prince George’s County Crime Solvers at 1-866-411-TIPS.

Violent crime has been on the rise in the affluent, predominantly Black county since March 2020, when the COVID-19 pandemic spread to America. Prince George’s County State’s Attorney Aisha Braveboy said officials have responded by implementing the “Our Streets Our Future” initiative, a local task force responsible for coming up with community solutions to the county’s crime problem.

The program will involve collaboration between law enforcement and community members, counseling for communities impacted by violence and a campaign involving community events, ads, and mentorship programs.”We believe this is the way to go because it going to take all of us to do the work to end gun violence,” Braveboy told WUSA9. “No one deserves to die in Prince George’s County.”