Patricia Schmidt has been identified as the lady caught on camera hurling racist insults at a mom and her kids.

A woman who works as an exceptional student education specialist in Collier County, Florida has been placed on administrative leave after calling children “half breeds” and “retards.”

NBC 2 reported that Patricia Schmidt has been identified as the lady caught on camera Saturday hurling racist insults at a mother and her children in the neighborhood of Kings Lake. Schmidt is reportedly employed by the Collier County Public Schools as an exceptional student education specialist at Lely Elementary School in Naples.

The matriarch said she and her family were taking a walk and nearing a passage designated for residents when a driving woman approached them and blared her horn. The woman behind the wheel, she says, “rolls her window down and starts yelling out the window that we can’t walk down that pathway.”

Schmidt was at that point caught on video shouting at the mother and mocking her children. She said, “Your son must be special ed. He’s a retard. Your son is a retard.”

In the video, she is then seen saying, “Are they your mulatto kids? You had sex with a black guy? Your kids are half breeds. Look at them.”

The outlet reports that they told the targeted mom, who is choosing to remain anonymous, where Schmidt worked, and she was incredulous, saying, “Who knows how she’s treating them in the classroom when their parents aren’t there to defend them?”

Neighbors told WINK News this isn’t the first time Schmidt has engaged in such antics. They note that she has self-appointed herself the guard of the walking path.

Doug Rankin, whose mother lived next door to Schmidt, said that “spotlights on the house” and “verbal abuse” were just a few of the things his mother endured as her neighbor. He even implied that the situation may have contributed to his mother’s death.

“It was not pleasant for her,” Rankin said. “It was basically, well, it ended up killing her, so it was like hell.” 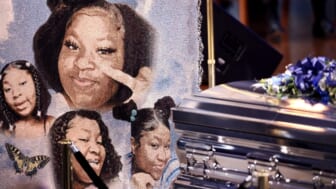 John Courtright also lives in the neighborhood. “I can guarantee you that’s not the first mother and children she’s done that to,” he said. “I’ve seen her do it to people. I’ve seen her yell at people, I don’t know how many times.”

The mother who was verbally attacked filed a report with the police, but they told her the incident was not a crime. However, Schmidt’s neighbors want something done about her reckless behavior. They have also appealed to the neighborhood homeowners association.

“We kind of hope that maybe, at this point, it will bring to a point where somebody will really do something,” Courtright said. “That something will happen.”