Vanessa Bryant shared a sweet message to her late husband Kobe Bryant on what would have been his 43rd birthday.

She took to her Instagram page to share a photo of the couple kissing next to the Larry O’Brien Championship Trophy, paired with a message that read “Happy birthday, Papi. Te Amo por siempre. Amor Eterno 43.”

Vanessa, who has openly expressed her grief via social media with family pictures and old videos, also posted in her Instagram stories a photo of a bouquet of flowers she received from her late husband’s Lakers teammate, Pau Gasol.

The flowers had a card attached which read “Thinking of you guys. Happy heavenly birthday to Kobe. We love you so much! Love, The Gasols.”

As the day went on, Vanessa received even more flowers sent by friends and continued to post photos of them in her Instagram stories.

A bouquet of pink roses with a note from Khloe Kardashian read “Always thinking of you. Khloe.”

Ciara and Russell Wilson also sent an arrangement of red roses with a card that read “On this day, a legend was born. The world was graced with a man of great vision and purpose. A man who loved his family. A hero for all of us. We love you. Always here for you. Love The Wilsons.”

Kobe Bryant and his 13-year-old daughter, Gianna Bryant, were killed in a helicopter crash on Jan. 26, 2020 in Calabasas, California. Accompanying the Bryants on their helicopter were seven other victims, including the pilot. There were no survivors.

An outpouring of tributes came from all over the world in remembrance of the late Hall of Famer and Oscar winner.

Celebrities and his NBA peers, including Dwyane Wade and many more, expressed their love for the “Black Mamba” with heartfelt messages.

On Twitter, Wade shared a reel with highlights of Kobe, captioned “Mamba Forever. Happy Birthday Big Bro.” He ended it with purple and yellow heart emojis.

Bryant was posthumously inducted into the Naismith Memorial Basketball Hall of Fame this May.

Vanessa accepted on his behalf.

“I used to always avoid praising my husband in public, because I felt like he got enough praise from his fans around the world and someone had to bring him back to reality,” she said at the enshrinement ceremony. “Right now, I’m sure he’s laughing in heaven, because I’m about to praise him in public for his accomplishments on one of the most public stages.”

She continued: “To all of our close friends and family that have been present for my girls and I, thank you. That was just one, and it takes a village. But know that your kindness and love does not go unappreciated. I know that Kobe’s thankful that you’re all coming through for his girls. We love you all and are forever grateful for you.” 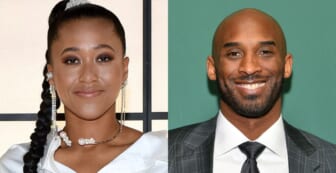 The NBA star was survived by Vanessa and their three other daughters, Natalia, 18, Bianka, 4, and Capri, 2, along with his parents Joe and Pam Bryant, and his sisters, Sharia and Shaya.