North Carolina judges have ruled to grant voting rights to over 50,000 convicted felons who are on parole and probation. 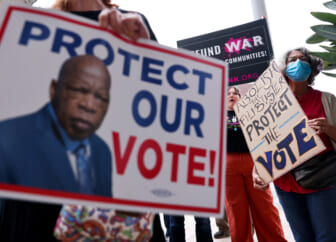 Monday’s ruling overrides the past law that required strict voting restrictions on convicted felons, requiring that all forms of probation and parole time be served before regaining access to the polls. This new law would apply to felons who are currently on probation, effective immediately.

Over the years, disproportionate voting restrictions have created divisions between the formerly incarcerated and other citizens throughout the country.

According to research done by the National Conference of State Legislatures (NCSL), only two states and Washington, D.C., advocate for all citizens to be entitled to their voting rights regardless of criminal history.

Maine, Vermont, and D.C. require that no restrictions are placed on any convicted felon, even while incarcerated. Felons in 11 states lose their voting rights, according to the nature of the particular crime and under certain circumstances must even receive a governor’s pardon, in addition to completing parole or probation.

The North Carolina State Board of Elections has already updated its website confirming the ruling.

Many in the Black community, including activists and a coalition of community leaders, believe current and past voting restrictions set in place are secretly targeting African Americans in hopes of silencing their civil rights. Felon voting restrictions, paired with the corruption of poll placement and mail-in ballots in predominantly Black areas, have been viewed as a way to control Black voter participation.

“What we are seeing is an unprecedented assault on access to the right to vote. Not only is it increasing restrictions on voter ID laws in certain states, but they are putting restrictions on mail-in ballots, which we saw overwhelmingly used during the pandemic, that allowed many African American seniors to vote through absentee balloting,” Green told theGrio. “Ohio, for example, they are putting only one drop-off ballot in every county.”

North Carolina state senator Warren Daniel (R) says that it is not a judge’s place to determine the restoration of voting rights.

“If a judge prefers a different path to regaining those rights, then he or she should run for the General Assembly and propose that path,” he said, according to NPR.

Daniel says that there is a clause in the constitution that defends the previous law of felons only regaining their state rights according to the law in that particular state.

“These judges may think they’re doing the right thing by rewriting laws as they see fit (without bothering to even explain their ruling),” he said in a statement reported by The New York Times. “But each one of these power grabs chips away at the notion that the people, through their legislature, make laws.”

North Carolina GOP lawmakers, who oppose this new law, plan to move forward with an appeal.