Martin Luther King III says that "we are targeting like a laser the United States Senate.”

Washington, D.C. was set ablaze on the 58th anniversary of the March on Washington. It was a hot 80 plus degree day with the sun bearing down on marchers and activists across the National Mall. 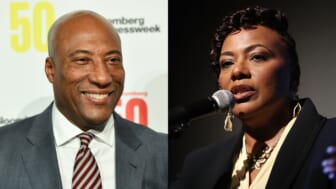 At the events housed on opposite ends of the mall, thousands poured into the city for a pilgrimage to the Lincoln Memorial to remember, commemorate, and force action on issues pertaining to the Black community. It is almost cyclical that in 2021 some of the same issues resemble those of 1963 and that most famous march where Dr. Martin Luther King Jr. delivered his iconic “I Have A Dream” speech.

However, the most well-attended event of the day was not at the Lincoln Memorial but blocks away at 7th Street and Madison Drive near several Smithsonian Museums and overlooking the Capitol Building.

This event, March On for Voting Rights, was led by Rev. Al Sharpton and Martin Luther King lll.  They wanted the focus of this year to have a different backdrop and selected the Capitol since they contend the fight for voting rights legislation is against the Senate. King said, “it’s been several months ago when we talked about the route, we had never planned to be necessarily at the Washington Lincoln Memorial.”

“We always had planned to be where the vote was going to be taken. And ironically, it just happens that the Congress or the House passed it the other day,” King added. “Now it’s up to the Senate. So we are targeting like a laser the United States Senate.”

Crowds flocked to Rev. Sharpton’s march. Yet, he told the marchers who began the event that started at McPherson Square, about three blocks from the White House, to go back to the busses because of the hot weather. Sharpton contends the numbers of marchers spanned 12 blocks with a total of 20,000 people.

theGrio is waiting for crowd estimates from the National Park Service or crowd control officials to confirm.

Rev. Sharpton reflected on his past marches at the Lincoln Memorial saying it takes about 200,000 to fill up that space.  Those were not the numbers today.  At the Lincoln Memorial early, there may have been less than a thousand people and a few thousand more at the other end of the Mall for Sharpton’s event.

Atlanta’s New Birth Pastor Jamal Bryant was in attendance, telling theGrio “we are still in a Delt Variant Crisis.  African Americans are woefully under-vaccinated and overwhelmingly impacted. Absence does not mean disconnection. So thousands have come. They are representing the thousands that cannot.”

“Power concedes nothing without a demand. We took notes that not one Republican voted for the John Lewis Bill,” Bryant added.

Bryant intends to “rattle every cage and shake every tree” on this matter. Derrick Johnson, the president of the NAACP, said they are giving a “40-day” window for Senate action.

District of Columbia Mayor Muriel Bowser showed up at both events promoting D.C. Statehood making the District the 51st state. She ushered a coalition of her own to both events.