During the West Wing late afternoon address on Afghanistan, Biden connected his Build Back Better Plan to voting rights.

President Joe Biden is faced with one crisis after another, and Afghanistan has topped the list with Biden telling the G-7 Summit he will not extend the Aug. 31 deadline, working on contingency plans for Americans left in that country after the deadline.

Meanwhile, there are so many other issues the Biden-Harris administration happens to be juggling and voting rights is a main part of that equation.

During the West Wing late afternoon address on Afghanistan, he connected his Build Back Better Plan to voting rights.

The president said, “I want to thank everyone who voted for the John Lewis Voting Rights Act.” He also placed an emphasis on the right to vote freely, and fairly without voter suppression, but he did not mention the filibuster that is holding up passage of voting rights in the Senate. 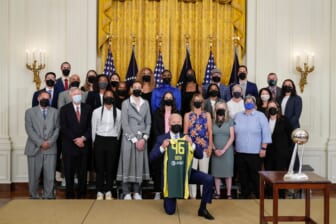 Some voting rights activists are not happy with the president’s efforts and are seeking a firm stance on abolishing the Senate rule. They took their disgust with the president to his front yard, Lafayette Park, just hours before his national address.

Ben Jealous of People for the American Way, Latasha Brown, co-founder of Black Voters Matter and Virgina Kase Solomon, CEO of the League of Women Voters, were among the advocates staked out in front of the executive mansion.

The League of Women Voters organized this rally where some of the notable attendees at one point zip tied themselves to secret service fencing.

But no message rang clearer than the chants and signs crying out  “Step Up Joe.”

The voting rally speeches and chants on Tuesday could be clearly heard in front of the White House and the West Wing. And echoes of the protestors sentiment reverberated in theGrio’s comment sections on related social media posts.

At the daily White House press briefing, theGrio asked White House Press Secretary Jen Psaki about the many protests on the current state of voting rights and a prevailing thought that the president is not leaning in enough to help fix the problem. 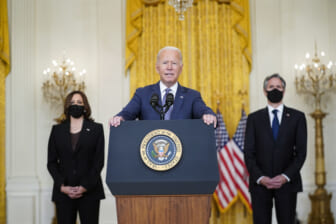 Psaki said in the late afternoon briefing, “[President Biden] stands by the activists and their vocal calls for more and more forward action. I would say he’s with them. He’s maybe not the right target of their frustration because his objective is also to get voting rights legislation passed. And he would like to sign that legislation into law.”

“How can we have a conversation about democracy abroad, a war that they spent $1 trillion dollars on and not do what’s in your own backyard,” Brown inquired.

Brown said we are in a small window of time to get new voting rights legislation passed into law.

“There’s a deadline for the pull out of Afghanistan. What will be the deadline for Black folks to not have to fight for our voting rights. When is that deadline?” she added.