The Mabel Rush Elementary School staffer in Newberg, Oregon came to the campus on Friday calling herself Rosa Parks with her face darkened.

An elementary school staff member in Oregon came to work wearing blackface as a “protest” against coronavirus vaccine mandates.

According to a local news report from KOIN, the staffer from Mabel Rush Elementary School in Newberg, Oregon came to the campus on Friday calling herself Rosa Parks, with her face darkened with iodine.

The report says that the Mabel Rush staff member — a special education assistant named Lauren Pefferle — was immediately removed from school grounds and placed on administrative leave on the day of the incident.

“Last Friday, one of our employees reported for work in Blackface,” the district’s statement maintained. “The employee was removed from the location and (human resources) has placed the employee on administrative leave. The administration of Newberg Public Schools condemns all expressions of racism.”

“It is important to remember how Blackface has been used to misrepresent Black communities and do harm,” it continued. “We acknowledge the violence this represents and the trauma it evokes regardless of intention.”

“Each incident report is always taken seriously as we diligently follow our policies to investigate and take appropriate action,” officials said. “We continue to work towards a safe and welcoming environment in our schools that is free from bullying and reduces mental, emotional and physical harm as we move forward together in our mission of educating students.”

A Black parent who ran for a seat on the school board and has children in the district said the incident follows comments made by county commissioner Mary Starrett, who compared the vaccine mandates to Jim Crow.

“That was only a couple months ago,” Tai Harden-Moore said. “Our county leadership is saying basic public health measures are akin to Jim Crow. There is a line between our political leadership and something like this happening. Our leadership matters.”

Dr. Joe Morelock, Newburg School District superintendent, said he was “horrified, angry and ashamed that this happened, as is nearly every other staff member.” 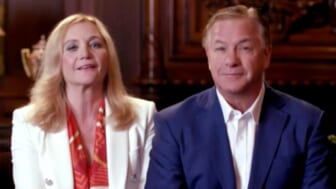 “The students of color in Newberg deserve so much more,” he said last week. “This goes against everything I and the vast majority of NSD staff believe, and is unfathomably offensive.”

Just days ago, students at Newberg High School were discovered talking about Black students in a social media group and engaging in a hypothetical slave trade, according to local reports. The online chat reportedly occurred in 2020 but was only discovered recently by school officials.

A Black parent at the school told WGN her “heart is so broken for these kids who have gotten the message that they are not even seen as human by some of their fellow students.”

“To imagine your own child being talked about as if they were subhuman slaves to be sold by other students,” said Heidi Pender, the mother of a Black student at Newberg High, “it made me feel like I was going to throw up.”