The images of Haitian migrants pursued by Border Patrol agents on horseback, Waters says, "takes us back hundreds of years."

California Congresswoman Maxine Waters said at a press conference Wednesday that the treatment of Haitian migrants is “worse than what we witnessed in slavery.”

She opined that the images of Haitian migrants being pursued by Border Patrol agents on horseback “takes us back hundreds of years.”

“Cowboys with their reins, again, whipping Black people, Haitians, into the water,” she described aloud, “where they’re scrambling and falling down when all they’re trying to do is escape from violence in their country.”

Waters further criticized President Joe Biden‘s administration and its foreign policy, comparing it to that of his Republican predecessor, asking, “What the hell are we doing here?”

“We are here, and we are organized, and we are saying to the president and everybody else, ‘You got to stop this madness,'” Waters said.

At a wet, outdoor press conference on a rainy day, the longtime legislator was joined by other members of the Congressional Black Caucus, the Caribbean Caucus, the Haitian Caucus and the Hispanic Caucus to condemn the treatment of the migrants.

“We cannot and must not look away in this moment,” Massachusetts Rep. Ayanna Pressley said. “Haitian lives are Black lives, and if we truly believe that Black lives matter, then we must reverse course. The Biden administration must immediately and indefinitely halt all deportations of Haitian migrants.”

“It must affirm and guarantee the right to due process for those seeking asylum,” she maintained, “and it must use every resource available to support those fleeing this humanitarian crisis on the island.” 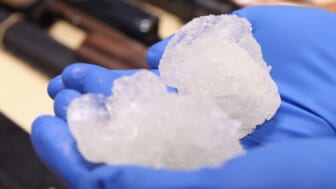 Thousands of Haitian migrants have come to the border city of Del Rio, Texas in an attempt to enter the United States.

Sherrilyn Ifill of the NAACP Legal Defense Fund theGrio this week “the images we saw of Border Patrol agents on horseback menacing and corralling Black migrants like cattle raises for so many of us — especially for Black people — the most painful, hideous images of slave patrols from the most ugly periods of this nation’s past.

“It is unconscionable,” she said, “as are the mass deportations of desperate migrants back to Haiti — a country ravaged by a catastrophic earthquake this summer and by the assassination of the country’s leader.”