Shawn Bauck, 25, says he was subjected to a racist rant by a waitress at an Estes Park, Colorado restaurant in March

A Colorado man is taking legal action after allegedly being racially profiled by a staff member at a restaurant in Estes Park.

Shawn Bauck, 25, told Newsweek he and his girlfriend stopped at Cousin Pat’s Pub and Grill for a quick bite to eat, but were instead subjected to a racist spiel from a white waitress who used the N-word, made derogatory generalizations about Black people and attempted to justify police bias.

During the March encounter, the unnamed woman told Bauck, an environmental science major at the University of Colorado, that he seemed “educated” for a Black person, stating that the majority of Black people were “gangsters, thugs and wifebeaters.”

“It seemed normal and then suddenly she just decided to delve into how she has a friend who is a racist cop in Aurora, Colorado,” Bauck said. “She’s like, yeah, my friend is a racist cop but it makes sense that he’s racist, just to be around Black people all day, like gangsters, thugs and wifebeaters… I’m like, whoa, you can’t say any of that.”

When the woman continued her rant, including using the N-word, Bauck went to the restaurant’s owner, Patrick Beard, to lodge a formal complaint.

“This dude is sitting so close, like no more than five meters away,” Bauck said. “I walk over to him and say, ‘Hey, your waitress just went off on this whole racist rant at me and said the N-word to me.’” 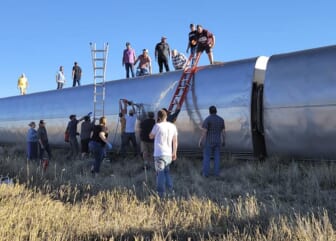 Bauck said instead of taking action, Beard simply shrugged it off with a smirk and said “Oh, well, I have to know the context of that.”

When it became clear to Bauck he wouldn’t receive any help from restaurant staff, he proceeded to file a racial discrimination lawsuit with the Colorado Civil Right’s Division. The case is currently pending.

“It’s really sad I have to file this lawsuit in 2021,” Bauck said. “Apparently some people in Colorado have totally forgotten all about the Civil Rights Act of 1964 which has only been on the books as federal law for like, I don’t know, 57 years.”

“The law, if not our history, does not allow a restaurant owner to do nothing when a Black person informs him of racial slurs being used by employees in the establishment,” said Bauck’s attorney, Jason Flores-Williams. “The image of a person of color leaving a restaurant with their heads down, and without due process, is a fixture of our history that we should no longer be willing to accept in any form.”

In response, an attorney for Cousin Pat’s Pub and Grill delivered a statement to Denver 7 claiming Bauck “mischaracterized” the encounter and that the restaurant does not discriminate against any of its patrons.

The attorney continued that the server, who is “no longer employed” by the establishment, “insisted that the conversation did not evolve into an attack or discrimination” against Bauck.

Bauck told Newsweek that he has learned that the server was not fired as a result of his complaint, but instead quit her job voluntarily several months after the incident.

Such encounters as Bauck’s are nothing new to Estes Park. The northern Colorado town is one of multiple towns in the state still classified as a “Sundown Town” — traditionally white-only spaces that practice codified racial segregation, gaining their name from signs that were commonly posted warning “colored people” to leave by sundown.

Bauck has set up a GoFundMe to help pay for his legal fees and continued efforts to fight against racial discrimination in Estes Park, Colorado.