After Friday’s headline-making episode of The View, Sunny Hostin spoke out about her false positive COVID-19 test, sharing, “it’s triggering.”

The View‘s planned interview with Vice President Kamala Harris took an unexpected turn when co-hosts Hostin and Ana Navarro were quickly asked to leave the stage before the VP was supposed to walk out, theGrio previously reported. Shortly after, moderator Joy Behar revealed that both Hostin and Navarro had tested positive for COVID-19, with both Behar and Sara Haines reacting to the news live in real-time.

While secret service members reportedly ensured the vice president’s safety, Haines and Behar were left to entertain the audience, in the clip that has since taken off on social media. 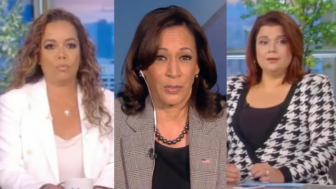 While Navarro appeared on CNN this weekend and revealed her experience and that she had a false positive COVID-19 test, Hostin waited until Monday morning live on The View to speak to her experience on that now infamous day.

She shared in the episode, “First let me say, there was an incredible outpouring of love and support from so many people and I appreciate it so much.”

Hostin explained that she received thousands of calls and messages.

“But it was really uncomfortable for my results to be released publicly before I even knew what was going on, before they were verified, before I was tested again and again, and there are real life ramifications when things like that happen,” Hostin explained.

She went on to detail how her husband, a surgeon, had to be pulled out of the operating room when the news broke. She also shared how her children and parents were notified and had to be tested.

Hostin also called the news, “particularly triggering,” as she lost both of her in-laws to COVID-19 earlier this year.

“Not too long ago, I delivered the eulogy at my in-laws’ funeral, so you could imagine how I felt thinking that I could possibly be COVID positive, and my family could experience another loss—a loss that I don’t think my husband could handle,” she said.

She went on to explain that she was “relieved,” to say the least, that she tested negative, insisting she was always “assured” by the fact that she was fully vaccinated and knew that she would “likely be okay.”

She also revealed that Navarro’s sense of humor “really got her through it.”

Navarro revealed on Instagram on Saturday that she tested negative, theGrio previously reported.

She shared, “[I] got my third negative PCR test just a few minutes ago and came to the airport to fly home…Obviously, what happened yesterday was a false positive. A very public, very inopportune, very melodramatic false positive. But fortunately, we’ve now tested three times. All three have been negative.” 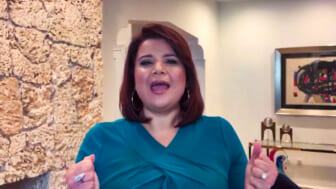 Executive Producer Brian Teta also spoke on the air, revealing, “It was just an unbelievable set of circumstances, and we found out moments before we came back on the air. In that moment, all I could think of was that we had to keep the hosts safe and we had to keep the vice president safe, she could not walk out no matter what.”

He went on to acknowledge and apologize to both Navarro and Hostin for being put in “a really awkward position” as this information was put out on television, only for the tests to be false positives.