Henry Jemmott, a high-ranking police official in Belize, was shot and killed at the hand of socialite Jasmine Hartin last May on the island.

Also Read:
George Floyd statue in NYC is vandalized for a second time

Hartin, who faces charges in his death, is speaking out about the incident, insisting that she shot him accidentally. Hartin, 32, broke her silence regarding the incident on CBS News‘ 48 Hours on Saturday. In an episode entitled, “Jasmine Hartin’s Shot In The Dark,” Hartin tells her side of the story.

She indicated to 48 Hours correspondent Peter Van Sant that she did, indeed, shoot Jemmott, a father of five, but not on purpose.

Hartin originally moved to Belize in 2014, then began a relationship with Andrew Ashcroft, son of British billionaire Lord Michael Ashcroft. Hartin stated that she and Jemmott, a police superintendent in Belize, had become friends after she had met Ashcroft in 2015, with whom she shares twins.

During the 48 Hours interview, Hartin stated that one evening last May, she was physically accosted by a man at a party and called Jemmott to help her leave. She states that Jemmott told her to get a gun for protection. On the night of the incident, Hartin says that she was giving Jemmott a shoulder massage on the pier after a night of drinking and he had given her his own gun, a Glock 17 service pistol.

It was past midnight when Jemmott ended up dead, found with a gunshot wound behind his ear.

At first, Hartin stated that Jemmott must have been hit by a stray bullet from a nearby passing boat, according to Belize news reporter Cherisse Halsall. However, after meeting with her lawyer at the jailhouse, Hartin then stated that she did, in fact, shoot Jemmott, but accidentally.

Hartin stated that Jemmott was trying to instruct her on how to load and unload the weapon and that’s when the firearm went off.

“I’m holding it like this on the top and like this and I’m trying to get the magazine out,” Hartin told Van Sant. “Next thing I know, the gun went off.”

Hartin has been charged with manslaughter by negligence and was released on bail. However, she was arrested again in June following an altercation with an employee of Belize’s Grand Colony Resort hotel where she once resided with Ashcroft and their twins, according to The Daily Mail. She stated she was trying to see her children, and was charged with assault, but was released again on $30K bail. 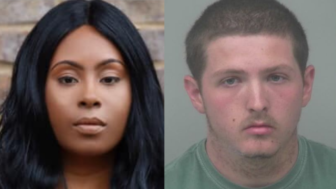 Also Read:
Georgia mother, 36, fatally shot by neighbor who was cleaning his gun

“The things that are at stake right now is my relationship with my children, my freedom, my business, my money, my character, my reputation and my life is at stake,” she said during the episode.

Watch the 48 Hours segment below.