George Floyd statue in NYC is vandalized for a second time

Skateboarder who allegedly defaced sculpture in Union Square was caught on video tossing blue paint on the Floyd bust; smaller version of statue was also vandalized in Brooklyn

A bust of George Floyd in Union Square has been vandalized just days after it was installed.

According to reports and captured video, the perpetrator was seen mixing blue paint behind the sculpture before throwing it on the bust and riding off on a skateboard.

Statues of Congressman John Lewis and Breonna Taylor — who was killed by police on March 13, 2020 — were both installed alongside the Floyd statue in Union Square on Thursday. The location was the site of significant protests last year in response to the police killings of Floyd and Taylor.

Terrence Floyd was on hand for the unveiling on Thursday, where he told audiences that he misses his brother, calling his murder “the straw that broke the camel’s back.” 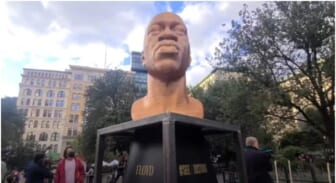 George Floyd was killed on May 25, 2020, by former Minneapolis police officer, Derek Chauvin, who pinned the man down for nearly nine minutes, restricting his breathing in front of a crowd of onlookers. The murder was captured on film and broadcast across the world, sparking global protests even in the midst of the coronavirus pandemic.

On June 25, 2021, Chauvin was sentenced to 22 and a half years in prison for the extrajudicial killing.

It has been reported that a smaller version of the Floyd statue was vandalized with paint in Brooklyn not long after it was unveiled. During that incident, the name of a white nationalist hate group was spray-painted on the statue’s pedestal.

The Brooklyn statue was desecrated in the days following Chauvin’s sentencing.

The Union Square art installation, SEEINJUSTICE, is on display for one month and is intended “to raise awareness of racism and actions for correction,” per NBC New York.

The artist who created the three busts told the local news outlet, “Art creates an environment for civil discourse. We can talk about our differences and maybe even come to some understanding of each other’s perspectives.”

The statues are 12 feet tall and are made from precision-cut Okoume plywood and finished with bronze. They were commissioned by Confront Art—an organization that pushes for social change.

According to Time Out, the organization has been working with George Floyd’s brother’s charity, We Are Floyd, the Breonna Taylor Foundation, as well as The John and Lillian Miles Lewis Foundation to raise awareness on social justice issues and provide a safe place of healing and community through public art.