The historic achievement is Wallace’s first career win, according to a tweet from NASCAR.

The 27-year-old driver was in first place in the race at Talladega Speedway on Monday when officials ended the event due to rain—awarding Wallace the win.

In a tearful statement following his victory, Wallace said, “This is for all the kids out there that want to have an opportunity and whatever they want to achieve, and be the best at what they want to do. You’re going to go through a lot of bulls***. But you always got to stick true to your path and not let the nonsense get to you.” 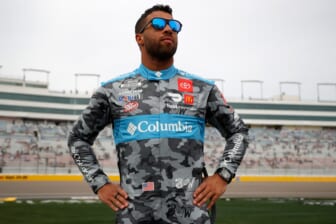 Wallace, one of the few African American drivers in the sport, has spoken out in the past about racial discrimination. In the summer of 2020, Wallace alleged that a noose was found in his garage. An investigation by NASCAR and the FBI concluded that the rope was only a “garage door pull.”

As previously reported, Wallace refuted that conclusion telling CNN’s Don Lemon, “I’ve been racing all of my life. We’ve raced out of hundreds of garages that never had garage pulls like that.”

“It was a noose,” Wallace told Lemon. “Whether tied in 2019 or whatever, it was a noose. So, it wasn’t directed at me but somebody tied a noose. That’s what I’m saying.”

Wallace will soon make history again as a documentary about his 2021 NASCAR season is coming to Netflix.

Wallace is now driving the No. 23 car in Michael Jordan‘s 23XI Racing team. At the time of the announcement, Jordan released a statement saying, “Historically, NASCAR has struggled with diversity, and there have been few Black owners. The timing seemed perfect, as NASCAR is evolving and embracing social change more and more.” The upcoming Netflix series will explore that newly formed team and the current season, according to Deadline. 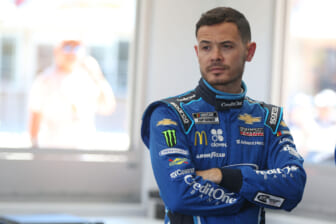 According to ESPN, after Monday’s NASCAR Cup Series race, and as fans chanted his name, Wallace said, “Got some credibility to my name now,” adding, “I’m just like, ‘Finally, I’m a winner and I’m a winner in the Cup level,’ and it’s just like, ‘Hell yeah!’ It was a huge weight lifted off my shoulders.”

The first African American to win the top-level race in the sport was Wendell Scott, in 1963. Scott was announced the winner after another man, a white man named Buck Baker, was presented the trophy. Scott’s family was finally presented with his winning trophy just two months ago.