In another homophobic rant, Boosie said Lil Nas X should commit suicide because it would "do this world a huge favor"

Rapper Lil Boosie told fellow musician Lil Nas X, that if he commits suicide it “would do this world a huge favor world,” after the Montero rapper joked about working on a song with Boosie.

On Saturday afternoon, Lil Nas X went on Instagram live and trolled viewers saying that he had a song featuring the Baton Rouge rapper that was coming out soon. Boosie has repeatedly sexually harassed Lil Nas X because the musician is open and proud of his sexuality.

In response to the obvious troll statement, Boosie posted a tweet, which has since been taken down for violating Twitter’s community safety rules, calling the Industry Baby singer several derogatory names and making disparaging comments about his sex life.

Boosie ended the homophobic rant by saying, “nobody wants you here.”

Lil Nas X, who has been vocal about how homophobia is deeply embedded in hip-hop culture and particularly among Black male artists, seemingly ignored Boosie’s rant and tweeted: “i am truly saddened. i have never been so mortified in my life. i can’t believe disney channel has yet to play halloween town this entire october.” 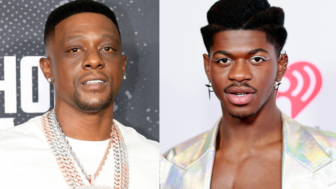 Lil Nas X, who has skyrocketed to fame due to the success of his hit single “Old Town Road,” has been the target of the many recent homophobic attacks from other artists.

The Grammy-award-winning rapper came out as gay in the summer of 2019, during what he said was “one of the scariest moments of his life.”

“I was afraid because I knew the world was watching, and all I ever saw for boys like me was judgment and ridicule,” he recalled while accepting the 2021 Native Son Award, which honors Black men in media, entertainment and activism. “But it was because the world was watching that I knew I had to stand in my truth.

The musician has been using his platform to speak on behalf of the LGBT+ community and advocate for gay and queer causes.

After the release of his debut album, MONTERO, he announced to fans that he had a baby registry, where they could donate to several queer and gay serving non-profit organizations that support and advocate on behalf of marginalized people. 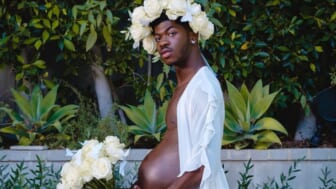 After the release of the music video for his lead single, “Call Me By Your Name”, where Nas X is seen dancing on a devil-like character and frolicking with men, Boosie said that he would beat Nas X and that he had to “stand up” for straight people during a Breakfast Club interview.

“You can’t brag on really smashing or your sexuality no more,” he added, stating that straight musicians aren’t able to make music about sex because the industry is now “ran by LGBTQ” people. The rapper also said that Lil Nas X is too sexual which is “not safe” for kids.

Host Charlemagne that God and DJ Envy immediately call Boosie out for his hypocrisy, saying he has dedicated decades to making misogynistic and sexist music that hurts Black women. Boosie completely ignored their argument.

In response to the interview, Nas X plugged his Billboard No. 1 single, Industry Baby, featuring Jack Harlow, saying in a tweet, “wow…. this is insane. almost as insane as my new single “industry baby” which is out now!”

Boosie has repeatedly attacked Lil Nas X, including during an Instagram live where he was defending rapper DaBaby after his unsolicited homophobic rant at Rolling Loud.

“Lil Nas said he wants to perform naked for charity. Like bruh, they don’t tell him nothing,” he said in an Instagram live. “They should be picking sides, man. You don’t tell his lil f***** a** nothing. That’s the most disrespectful motherf***** in the world.”

Lil Nas X has always trolled Boosie back and moved the focus onto something else. However, many have stated that the targeted harassment not only perpetuates homophobia in the Black and hip-hop community, but it also creates dangerous environments for queer Black people to feel safe.