The famed boxer allegedly shut down the photo request after Saturday's Clippers vs. Grizzlies game at Staples Center.

Floyd Mayweather reportedly refused to take a selfie with a male teenage fan because his nails were painted.

Mayweather allegedly shut down his photo request after the Clippers vs. Grizzlies game at Staples Center on Saturday. The 18-year-old white male shared a photo of his black-painted nails with TMZ Sports on Monday

“You got painted nails, I don’t take pictures with guys with no painted nails,” Mayweather is heard saying in a video of his encounter with the fan. 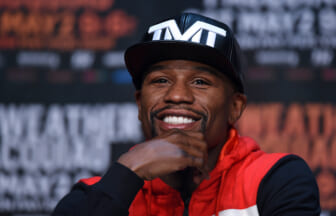 “Floyd doesn’t want to take a picture with me because my nails are painted. Bruh, really?!” the unnamed fan said.

A$AP Rocky has publicly celebrated male manicures. In a 2019 interview with Vogue, the Harlem-born rapper explained why more men should rock an artsy manicure.

“I feel like men should be able to do nail art without feeling feminine,” he said.

For his collaboration with Prada’s Fall/Winter 2019 collection, the hip-hop star said a “really, really good lady” painted the Italian fashion brand’s logo, as well as tiny American flags and yellow smiley faces and flames on his nails. At the time, A$AP Rocky shared photos posted to his Instagram showing his nail designs.

Rocky has also had the words “love” etched on his nails as well as “F**k off.”

One commenter noted that Mayweather is judging boys wearing nail polish while his daughter is facing decades in prison. Yaya Mayweather is reportedly facing 20 years in prison for allegedly stabbing one of the mothers of rapper NBA YoungBoy‘s children.

“He gonna judge a boy with nail polish but bail out his daughter for stabbing someone for no reason,” commented one Instagram user.

The incident occurred last spring and stemmed from an altercation that Yaya Mayweather had with Lapattra Jacobs, mother of YoungBoy NBA’s child. The altercation is believe to have sparked after Jacobs ignored Yaya’s request to leave the house and a fight ensued. Jacobs told police Yaya grabbed two knives in the kitchen and stabbed her with one.

Yaya was arrested and charged with aggravated assault with a deadly weapon, a felony. She was released on a $30,000 bond. 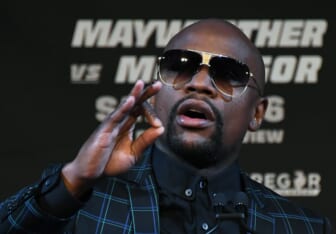 If found guilty, she could face a maximum of almost ten decades in prison, which is less likely, given that she has no previous criminal history. At a minimum, she may have to pay a $10,000 fine.

The boxing champ addressed his daughter’s legal woes last April in a video response to those who criticized him for Yaya’s actions. Mayweather captioned the clip, “Never claimed to be perfect, but I strive to be the best father possible. #DaddyDuties”

Mayweather’s lawyer, Kurt Schaffer, said that Yaya will be “fully vindicated.” The attorney has represented high-profile figures such as Slim Thug, J Prince, and the late Pimp C.