The rap song by Bryson Gray takes aim at the president and his handling of the COVID-19 pandemic.

Adele’s return to the top of the charts didn’t last long. The comeback track, “Easy On Me,” from the the 15-time Grammy winner was knocked out of the top spot of the iTunes Store song chart by rapper Bryson Gray and his anti-Joe Biden song, “Let’s Go Brandon.”

The track criticizes the president and his administration while accusing the government of playing a major role in the COVID-19 pandemic. Its title comes from NASCAR fans who chanted “f–k Joe Biden” after driver Brandon Brown won a race at the Talladega Superspeedway earlier this month. When Brown was interviewed by reporter Kelli Stavast, she suggested the crowd was chanting “Let’s Go, Brandon.” 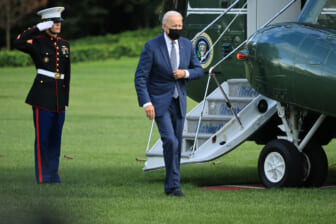 Also Read:
Where does the Black agenda stand as President Biden heads to Italy for G20?

The song starts with an audio clip of Biden encouraging people to get the COVID-19 vaccine to combat the virus, saying “You’re not going to get COVID if you get these vaccinations.” Gray then launches into the song, rhyming the phrase “Let’s Go Brandon,” over ominous piano chords, trap drum and bass patterns. The hook includes the line, “Pandemic ain’t real, they just planned.”

The first verse starts with Gray talking about how Biden is spreading lies about the vaccine and how lawmakers can’t be trusted on the subject.

“Biden said the jab stop the spread, it was lies/
How you woke, but you haven’t opened your eyes?
These politicians are demons, just in disguise/
Look at Kyrie Irving and Nicki Minaj“

The song has become a code for anti-Biden sentiment: During a House of Representatives session this week, Florida Representative Bill Posey yelled out “Let’s Go, Brandon” at the end of his remarks.

The Irving and Minaj references are because both publicly expressed their unwillingness to take the vaccine. Minaj tweeted that she refused to go to the Met Gala because it required vaccination and she wanted to continue her “research.” Irving’s refusal to get the jab keeps him from playing with The Brooklyn Nets, as all New York sports teams are mandated to be fully vaccinated to enter home stadiums. 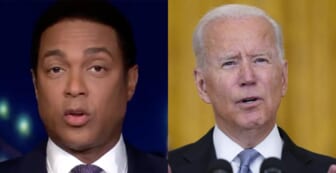 Later in the song, guest rapper Tyson James calls out Biden after the president was accused of inappropriately touching women last year:

“Listen, I don’t think you here, man, let me make it clear, man/
Better keep yo’ hands unto yourself, that stuff is weird, man”

Eight different women accused Biden of such behavior, including former Senate aide Tara Reade, who alleged that the president sexually assaulted her in 1993.

In the music video, Gray is seen holding a machine gun, while wearing a “MAGA” bucket hat with a blue shirt that reads “Impeach Joe Biden.”