Terrell Davis-Emmons was stabbed to death last November in London.

Rapper 21 Savage will finally see justice for the murder of his younger brother: The man charged with his death has been sentenced to a decade behind bars.

Tyrece Fuller was charged for the murder of Terrell Davis-Emmons, the younger brother of the Grammy nominated rapper, whose real name is Shéyaa Bin Abraham-Joseph. Fuller was found guilty of manslaughter for the death of Davis-Emmons, but was not convicted of murder. He was not present for his sentencing, as he refused to vacate his cell; the judge stated that Fuller displayed a “lack of courage.”

Davis-Emmons, 27, and Fuller, 22, got into an altercation in London Nov. 22, while Davis-Emmons was helping his grandmother with grocery shopping, as reported by The Daily Mail. According to a witness, Davis-Emmons wielded a machete that he placed it back into its sheath when Fuller lunged ahead to stab Davis-Emmons with a six-inch blade. Davis-Emmons, who also went by the rap name TM1way, was pronounced dead at the scene.

Fuller was arrested on Nov. 28 by Metro Police and charged with murder.

After learning the news of his brother’s death, 21 Savage disclosed his grief in an Instagram post of a childhood photo of the two of them together, as previously reported by theGrio. The caption was short, but full of regret; “Can’t believe somebody took you baby bro I know I took my anger out on you I wish I could take that sh*t back.”

Savage has yet to publicly comment on the conviction or sentencing of Fuller.

Davis-Emmons and 21 Savage share the same father and were both born in London. However, Savage moved to Atlanta at age seven to live with his mother. He’s been dealing with his own issues with the law as of late: The “A Lot” rapper turned himself into authorities in September after warrants were issued for his arrest on weapons and drug charges in DeKalb County in Georgia, but only spent 12 minutes in jail before being released. 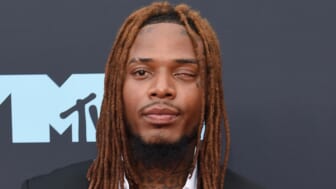 Atlanta attorney Charles Kuck said that the arrest is related to ongoing immigration litigation against the rapper. In Feb. 2019, 21 Savage was arrested by Immigration and Customs Enforcement (ICE), over a widely publicized dispute. Officials stated that he is a U.K citizen who overstayed his time in the United States.

Despite the personal turmoil, 21 Savage has enjoyed continued success in his music career. As fans await the follow-up to his 2018, number one album I Am > I Was, he treated fans to a four-song soundtrack EP for the horror film Spiral. His also been racking up more hits as a featured artist in 202: his collaboration with J. Cole “My Life,” hit number two on the Billboard 100, and the posse cut “Who Want Smoke??,” featuring Savage, Nardo Wick, G Herbo and Lil Durk reached the the Top 10 on both the Billboard R&B and Rap charts.