Michelle Obama to lead discussion with college students from 22 schools

Former first lady Michelle Obama has teamed with black-ish actor Yara Shahidi for a Livestream conversation with college students from 22 schools throughout the country.

Obama and Shahidi will host the event at Prince George’s Community College in Largo, Maryland, on Nov. 9 at 1 p.m. BET will air the special at a date not yet determined, ABC News reports. 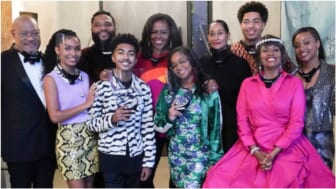 “I can’t wait to hear from students across our country as they navigate their studies and lives during this unprecedented time,” Obama said in a statement Monday.

“As a first-generation college student myself, I remember my own struggles to manage classes and figure out my place on campus — and I can’t even imagine how much harder it is to do it during a pandemic, when so much feels like it’s constantly up in the air. I just hope they realize that moments of self-doubt and fear are completely natural, but if we embrace those moments — if we own our stories and use our voices — we can share the very best parts of ourselves with the world.”

The event is part of Obama’s current promotional effort for her memoir “Becoming,” which sold nearly 10 million copies in the U.S. alone. In the book, Obama talks about life before and after her time in The White House.

While the world knows Obama for her zeal and advocacy for public health, higher education, and women and girls empowerment initiatives during her tenure at The White House, her book shows the intimate and vulnerable sides of Mrs. Obama, theGrio previously reported.

Sharing with the world her truths, her triumphs, and even trials of growing up with humble beginnings in the South Shore neighborhood of Chicago; her life as a doe-eyed, nervous college student at Princeton University and later, Harvard Law School; to falling in love and lust with her husband, President Barack Obama; the painful experience of suffering a miscarriage and conceiving her daughters through IVF treatments; going to marriage counseling; to being mother-and-wife-in-chief and more, the highly anticipated book is an ode to the importance of finding your voice, standing firm in your beliefs and being proud of who you are and where you come from.

According to David Drake, president of Crown Publishing Group, 100 copies of Obama’s “Becoming” will be donated to each of 12 schools in the Maryland Community College Consortium, per the report.

“We know the book has been deeply impactful for young people, especially young women, and has become a kind of touchstone,” Drake said.

Obama’s effort to reach young adults via this livestream coincides with the announcement that she will join the cast of black-ish as a guest star for the upcoming eighth and final season, set to premiere in early 2022. 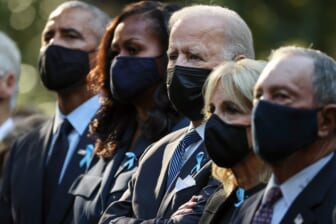 Also Read:
Michelle Obama reflects on where she, Malia and Sasha were on 9/11

“#blackish is going all out for the final season!” the series shared on Thursday. “We are honored to have trailblazer @MichelleObama join us as an upcoming guest star.” The ABC series debuted in 2014 in the middle of former President Obama’s second term.

An exact premiere date has not yet been announced for black-ish Season 8.