With the gesture, Staley fulfilled a promise she made to former Purdue coach Carolyn Peck, who won an NCAA Tournament championship in 1999

Before Dawn Staley became the second Black woman to head coach a college basketball team to a national championship in 2017, she was gifted a boost of motivation — a piece of the championship net cut down in 1999 by former Purdue Coach Carolyn Peck, the first Black woman to accomplish the feat.

As reported by the Washington Post, Peck’s offering came with a caveat: Once Staley won her first title, she would have to replicate the favor with another coach she hoped to inspire.

Now, after leading the University of South Carolina Gamecocks to victory, Staley has fulfilled her promise and more, gifting a piece of the championship net to 80 Black women head basketball coaches across the country.

“After returning Carolyn’s piece of the net to her, I struggled to pick just one other coach to give mine to keep the tradition alive,” wrote Staley in a letter accompanying each piece of net she sent.

“It plagued me for months until I realized that it’s because I didn’t want to pick just ONE. I don’t want to count black women as National Championship coaches by one every few decades; I want us to do it so often we lose count!” she continued. 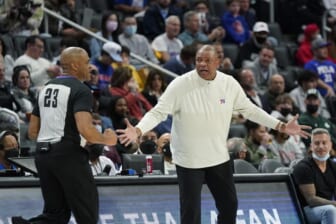 University of Denver Coach Doshia Woods, who was among the recipients of the net, said she was “floored” to be recognized by someone she admired for years throughout her playing and coaching career.

“I opened it, and I was just floored,” Woods told the Post. “I didn’t think she meant everybody, and to say that I was inspired would feel like an understatement. Honestly, it took me a couple of days to even articulate my words. It was just an incredible gesture that I’d never seen before.”

Staley said she hoped the gesture would motivate other coaches just as she was motivated by Peck’s gift, which she told The Undefeated was kept safely in her wallet from the moment she received it in 2015 to her championship years later.

“Sometimes when you’re going through things day-to-day and you don’t feel like you can see your way through it, that little nylon piece of string … [it] rejuvenates you to continue and it gives you that reason to keep pushing,” Staley said, per the Post.

Other recipients including Arizona Coach Adia Barnes, who in April came within one point of earning her own championship in a loss to Stanford, said the gesture is providing her a beacon of hope as Staley intended.

“It’s just something that I can look at. It’s what I’m striving to do, and she knows that,” Barnes said on Friday, as reported by the Post. “It was very thoughtful, and people don’t do those things, and I’m just proud to have a piece of it. Hopefully I’ll get one one day. I want the bigger one, too, so hopefully I’ll get the real net.”