Half of NY’s $2.4B in rent aid held up 6 months after launch

Nearly $1 billion meant to cover back rent for New Yorkers who suffered economic hardship because of the coronavirus pandemic still hasn’t made it into the hands of tenants six months after the program launched.

That’s led to exasperation, especially as the state warned that the $2.4 billion set aside for rent relief would likely not cover new applicants and mostly closed applications.

The hold up, state officials say, is partly linked to missing paperwork. About 82,000 applications for rental aid submitted by tenants through September are still incomplete. About a third of those unfinished and provisionally approved applications date back to June, according to state Office of Temporary and Disability Assistance spokesperson Anthony Farmer.

One issue is that the state is having trouble matching applications submitted by tenants with the landlords who own the property. Some tenants didn’t provide contact information for landlords or mistakenly provided phone numbers for property management companies rather than owners, which is an issue because the program is designed to send funds to landlords directly.

Farmer said the state hopes to someday release payments for two-thirds of the 82,000 applications that are matched with landlords who need to submit additional documentation. Farmer didn’t provide a timeline of when that could happen. 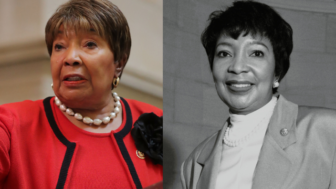 The remaining third of applications are further stuck in limbo because they’re either not matched with a landlord or because a landlord hasn’t created an account on the online application portal, he said.

Meanwhile, some landlords say they’ve been having trouble getting needed information from tenants, or from the state.

Brooklyn landlord Sharon Redhead said six tenants owe her about $50,000 in back rent and one of them didn’t provide her with an application number needed for state paperwork. She did get a computer-generated message from the state’s assistance agency that included the number, but Redhead said part of that message was “gibberish” and she’s been unable to decipher it.

“I can’t link that tenant’s application because I don’t have the application number, and OTDA is not able to help,” said Redhead, referring to the Office of Temporary and Disability Assistance.

Because of the delays, Redhead said, “landlords and tenants are in this predicament and tenants will be further in debt because the program took so long.”

Farmer said the state has expanded outreach to landlords based on contact information provided by tenants, and is trying to find new contact information for non-responsive landlords. He said the agency has enough workers to process applications: 1,750 staff, including 1,400 contractors and 100 state employees reassigned from other agencies.

Joseph Strasburg, president of the Rent Stabilization Association, which represents the residential housing industry, said his group will be working with the administration to help track down landlords, including in instances where opaque limited liability companies own buildings.

“We’re not sure why they’re not moving the money out as quickly as they should be,” he said.

Not all delays are due to bureaucratic hurdles. Some landlords don’t want to participate in the program because, if they do, they are prohibited from evicting the covered tenant for one year.

Brooklyn landlord Cynthia Brooks said she doesn’t want to keep a “squatter” who she said damaged her property, failed to pay rent, caused a roach infestation and banged on the door of her other tenant.

Still, Strasburg said he thinks it’s “rare” for a landlord to outright refuse to accept checks: “They want the money,” he said. “They haven’t seen payments for close to two years.”

New York only releases payments once a landlord cooperates and provides contact information. Under program rules, the state has to try to collect required documents for 180 days before giving up and reallocating the funds. Other states send money directly to the tenant, or reject applications more quickly when it is impossible to reach landlords.

New York’s online-only application portal — overseen by vendor Guidehouse — also faced a string of glitches this summer. At times, the portal erased applications and made it impossible to upload documents, according to The Associated Press’ interviews with dozens of tenants and community groups helping with applications.

“There’s seems to be a technical problem with the application process that has caused a lot of problems and slows everything down,” Ellen Davidson, staff attorney at The Legal Aid Society, said.

Farmer, of the state assistance agency, said that the state is addressing technical issues “promptly and as they arrive.”

“These issues have not resulted in any widespread delays of aid being issued to tenants, nor has the agency ever indicated as such,” he said.

Farmer didn’t say how many landlords have refused to participate.

But he said 43% of 27,300 incomplete applications from June, haven’t been matched with a landlord.

Gov. Kathy Hochul, who took office in August, is now seeking a billion more dollars in federal rental aid to supplement what the state has already allocated.

Some advocacy groups representing landlords and tenants have also urged her to reopen the rent relief application process, saying more than a quarter of a million applicants shows the need for help has far outstripped what the state has given out so far.