The Los Angeles Lakers' star player, who is vaccinated, didn't suit up in Tuesday night's game against the Sacramento Kings.

James didn’t play in Tuesday night’s game against the Sacramento Kings. According to reporting from ESPN, the team became aware that James was entering the NBA health and safety protocols on Tuesday morning.

“Obviously, it’s a huge loss,” Lakers coach Frank Vogel said in his pregame remarks Tuesday. “It’s disappointing. We just want the best for him right now. That’s where our thoughts are. And we have a next man up mindset.”

While Vogel did not respond to questions from reporters about whether or not James is experiencing symptoms, his teammate Anthony Davis told the media, “He’s said he’s good.”

According to ESPN, NBA mandates require any player who tests positive for the virus to spend 10 days in isolation with no physical activity. Following the isolation period, the player must undergo a cardiac screening and reconditioning to be cleared for a return to active play. 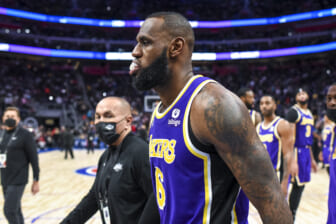 The Lakers’ star player told the media in September that he was vaccinated against the virus, making his infection a breakthrough case. “I know that I was very skeptical about it all,” he said back then in reference to inoculation. “But after doing my research and things of that nature, I felt like it was best suited, not only for me but for my family and my friends. And that’s why I decided to do it.”

Breakthrough cases of COVID-19 are typically asymptomatic or mild. The vaccine helps prevent severe disease but does not completely prevent infection. 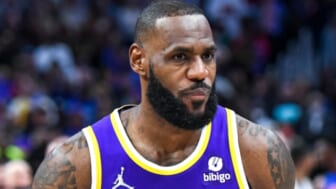 This latest setback is the third for James, who has missed several games due to injuries and one game due to a suspension following a skirmish on the court with Detroit Pistons player Isaiah Stewart last month.

“It’s an 82-game season,” Vogel said at the postgame press conference following the Lakers’ 117-92 win over the Kings on Tuesday. “You’re going to have to deal with guys going in and out of the lineup. We’ve been without him some already this season. I feel like we’re further along with our cohesiveness now than we were the first time he went out with his ab strain. And we got to come in and compete and get a W tonight.”