The 'Diamonds' singer was named a national hero of Barbados earlier this week.

Rihanna is setting the record straight after the internet went ablaze yet again with pregnancy rumors. The Fenty Beauty creator officially shut down those rumblings on Instagram, writing, “ya’ll breed me every year dammit.”

From her various business ventures to when she will finally decide to drop new music again, Rihanna is one of the most-watched celebrities in popular culture. Even her romantic life, including her current relationship with A$AP Rocky, is being followed and zoomed in on with every step.

The latest rumors surrounding the singer, however, came after she was named a national hero in Barbados this week, with social media questioning whether or not she was expecting due to the dress she wore to the ceremony. 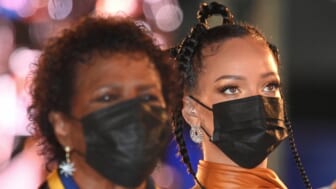 The hearsay quickly dominated social media, with fans giving their two cents on whether or not they believed Rihanna to be with child. A fan named Jen took matters into their own hands when they sent the singer an Instagram DM straight up asking whether or not the rumor was true.

They wrote to Rihanna, “Can I come to the baby shower sis!? 💀❤️ True or not your babies are going to be beautiful. Sorry everyone’s up in your uterus right now 😂💀.”

Rihanna responded to Jen and made it very clear that the rumor is not true, while also commenting on how people seem to be constantly fixed on whether or not she is having kids. She wrote in her response, “Haaaaa! Stawwwp! You ain’t came to the first 10 baby showers! Y’all breed me every year dammit lol.”

Jen shared the post to Instagram, helping to clear up that the rumors were indeed false. She wrote in the caption, “😂😂😂 her uterus said ‘stay out of my damn business’ 💀😎 I spit my water out when she said ‘the first 10 baby showers’💀💀😭 regardless i’m happy for her either way she’s living life to the fullest! ❤️👸🏾👑 #riri #loveya.” 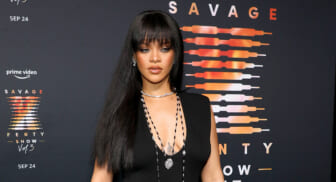 The ceremony in which Rihanna was named a national hero in Barbados was held Nov. 30. Prime Minister Mia Mottley shared at the ceremony, “On behalf of a grateful nation, but an even prouder people, we, therefore, present to you, the designee for national hero of Barbados, ambassador Robyn Rihanna Fenty.” Now, Rihanna will be referred to as The Right Excellent” or “The Right Honorable” Robyn Rihanna Fenty in her native country.