The record producer reportedly wants a monthly payment from Evans, and requests that the court not allow her to collect anything from him.

In yet another turn of events in the ongoing divorce drama between singer-songwriter Faith Evans and third husband Steve “Stevie J” Jordan, the producer is petitioning his soon-to-be ex-wife for a monthly stipend.

In court documents obtained by The Blast, under the section marked Spousal or Domestic Partner Support, the boxes “Spousal or domestic partner support payable to” and “petitioner” were checked off, as were “Terminate (end) the court’s ability to award support to” and “respondent.”

Stevie J is the petitioner, and Evans is the respondent.

Evans and Jordan were married in a surprise ceremony on July 17, 2018, in Las Vegas. The couple had known each other for more than 20 years, as Jordan was one of the popular in-house producers and writers for Bad Boy Records in the mid-1990s. He produced several songs for Evans, including a remix for her hit 1995 single, “Soon As I Get Home.” 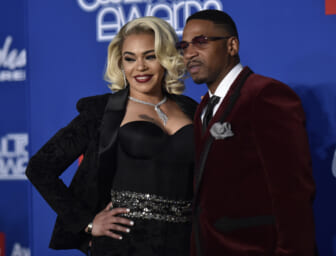 As previously reported, Jordan filed for divorce in early November, and just days later, Evans shared a series of videos of the couple frolicking on a beach.

“Get us free, bruh,” the caption read as the couple filmed themselves turning cartwheels in the sand. Evans tagged her husband in the post.

The following week, Jordan released a video apologizing to his wife for “talking crazy” to her in a now-viral clip of them sparring over her alleged infidelity.

“I’d like to make this video for my wife. A video was released last week that showed talking crazy to my wife. Publicly humiliate my wife,” he said In his apology message, shared in mid-November.

Several of Evans’ most recent Instagram posts are of her revealing herself to be “The Skunk” on the hit Fox competition series, The Masked Singer.