Host Cameroon came from behind with two penalties in the space of eight minutes at the end of the first half to beat Burkina Faso 2-1 Sunday in the opening game of the African Cup of Nations.

Captain Vincent Aboubakar scored both penalties, calmly slotting the first to the right side of the goal and the second to the left to complete a comeback that left home fans sighing with relief.

Cameroon had waited out a three-year delay to host this African Cup after being stripped of the 2019 tournament and then seeing its 2021 hosting delayed a year because of the coronavirus pandemic.

It seemed the wait wouldn’t be worth it when Gustavo Sangaré volleyed Burkina Faso into the lead in the 24th minute at Olembe Stadium in Yaounde.

He scored after Burkina Faso had a header cleared off the line and hit the crossbar in the same move.

But Burkina Faso lost the lead with two reckless pieces of defending at the end of the first half. 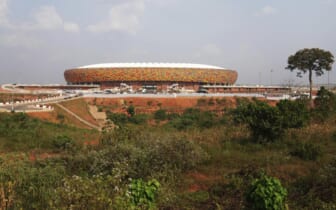 Bertrand Traoré barged into André-Frank Zambo Anguissa to give Cameroon its first penalty, which was only confirmed after referee Mustapha Ghorbal of Algeria consulted VAR.

VAR is being used in all games at the African Cup for the first time. It was used from the quarterfinals onwards at the last African Cup.

VAR was in the spotlight again in the second half when there was a long review to disallow a third goal for Cameroon for offside.

The African Cup officially started with a short opening ceremony a few hours earlier at Olembe Stadium. The continent’s soccer showpiece will be played under the shadow of the coronavirus pandemic and amid a global surge in cases.

FIFA president Gianni Infantino attended the opening ceremony, as did 88-year-old Cameroon President Paul Biya, who has led the Central African country since 1982.

Cape Verde plays Ethiopia in the other Group A game on the opening day.