After playing rapper on ‘Queens,’ Brandy wants to explore more rap in her music

EXCLUSIVE: "I want to do everything I can do before I can’t anymore," Brandy tells theGrio's Gerren Keith Gaynor.

Grammy-award winning singer-songwriter and actress Brandy has been entertaining audiences for the better part of 30 years. The 42-year-old has sold over 40 million records worldwide, toured around the world, and famously starred as America’s first Black Cinderella.

Now Brandy is back in the spotlight as the star of ABC’s musical drama, Queens (now in its first season), where the singer known by many in music as the “vocal bible” is now stretching her musical talents as a rapper.

Brandy plays Naomi aka Explicit Lyrics, who is one-fourth of the veteran hip-hop group, Nasty Bitches, who change their group name to Queens after the 40-something female artists settle into their womanhood as they navigate a changing music industry landscape.

Alongside co-stars Naturi Naughton, Nadine Velazquez and real-life rapper, Eve, Brandy has been applauded for her on-screen musical performance, in which she both sings and raps. In one scene that has gone viral on the internet, Brandy as Naomi and Eve, who plays Brianna aka Professor Sex, go toe-to-toe in a rap battle that is just as gritty and entertaining as any real cipher.

In an exclusive interview with theGrio’s Gerren Keith Gaynor, Brandy admits that she was a bit “intimidated” having to go bar for bar against veteran rapper Eve – even if it was all for television.

“That was crazy. I was shaking the day I read that that was going to happen … Like, that’s crazy. I’m a singer,” Brandy told theGrio.

Intimidation aside, viewers have marveled at Brandy’s delivery and her believability as a rapper, with some pointing out her unique raspy tone. While she’s worked with rap icons like Queen Latifah, MC Lyte and Yo-Yo and other rappers like Mase and Chance The Rapper throughout her career, Brandy has also dabbled in rap in the past.

The singer rapped on songs from her fifth studio album, Human, and even gave herself a rap name called Brand-Nu. Most recently at the BET Hip-Hop Awards in 2020, Brandy wowed audiences with her cypher rap with Erykah Badu, Teyana Taylor and H.E.R.

When asked if she would ever again explore rap in her real-life music career, Brandy said, “Absolutely. I’m definitely considering it,” adding “it would definitely have to be the right way.” 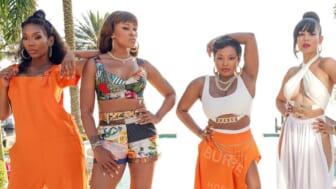 “Rap is a passion of mine. I’ve always loved it. When I was doing it consistently, I was writing [and] finding my own sound. It’s just testing my instrument,” she told theGrio.

“It’s fulfilling to me the way singing is, the way acting is, the way entertainment is. Rapping has that special place in my heart … When I first started rapping, I didn’t have this tone that I was able to find and really work on during the show. And so now I have a different tone and I want to dig more into that and get better and really incorporate it into my music.”

Brandy also got a chance to work alongside another phenom in rap, Remy Ma, who was so impressed by Brandy and Eve’s on-camera rap battle that she wanted in on the fun.

“She was like, You know, I had to come see for myself what was going on down here because I saw that battle and it looked so real. Remy wanted to make sure … this is scripted,” Brandy said, laughing.

Brandy said working with Eve and Remy Ma has been a dream come true. 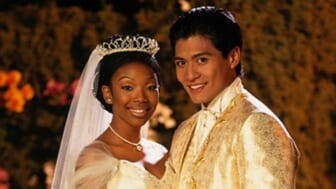 Brandy, who has explored various sounds of R&B and singing styles, told theGrio that she’s at the stage in her career where she simply wants “to do music that I want to do.”

Watch theGrio’s Gerren Keith Gaynor’s full interview with Brandy in the video above.