Queens on ABC is finally here, and we’ve got five reasons why it’s a must-watch show to add to your fall television lineup.

Since it was announced earlier this year, ABC has slowly dropped information and sneak peeks of the show, which stars Eve, Brandy, Naturi Naughton, and Nadine Velazquez. Queens is the story of “the Nasty B*tches, a hip-hop group from the 90s that has lost but is trying to regain its sizzle.”

Per the official series description, “the four ladies, now in their 40s, have been out of the game for years and hope to recapture their glory days.” Complete with infectious music, compelling storylines and more, here are five reasons to tune into Queens when it airs tonight.

Queens boasts a pretty knockout cast, with some meta casting decisions being made by pulling real Hip-Hop/R&B stars from the 90s to play members of the fictional group, Nasty B*tches. Brandy, of course, was a true teen sensation in the 90s, from her chart-topping hits like “I Wanna Be Down” and “Have You Ever” to her run on the popular sitcom Moesha.

Eve also is a 90s icon, with her debut rap album Let There Be Eve…Ruff Ryders’ First Lady breaking records to make her the third female hip-hop artist to hit No. 1 on the Billboard Hot 200 chart when it debuted in 1999.

Rounding out the cast is Naturi Naughton of 3LW fame, who has enjoyed a successful acting career with roles on Power and The Client List, and Nadine Velazquez of My Name is Earl and The League fame.

New music for your playlists

In addition to a stand-out cast, the show also boasts some pretty major tunes accompanying the series. Music icon Swizz Beatz serves as the series’ official music producer, overseeing the soundtrack to the Nasty B*tches’ comeback. Beatz shared in a statement, “To see these Queens come together in unity is amazing in 2021. This show is special in many ways to me and it’s an honor to be the executive music producer.”

ABC released an exclusive music video for their song, “Nasty Girl.” Featuring the four women in a lavish video complete with a yacht, back-up dancers and more, if the song is any indication, fans are in for a treat when it comes to the music of the series.

Queens will also feature some exciting cameos, per recent reports. ABC made a special announcement last month that Jadakiss and Fivio Foreign will guest-star on an episode in the first season. Jadakiss shared an exclusive selfie with Brandy on his Instagram account last month, writing in the caption, “i appreciate the love on set “QUEENS.”

A nostalgic look at the 90s

While the series follows the group as they try to mount a comeback, much of the show’s essence is grounded in the 90s, a time where female R&B groups and MCs were truly on the front lines and often the first of their kind. Brandy opened up about this while talking to Good Morning America: “I just loved the fact that it was a 90s hip-hop legendary group of women. I’ve never seen that, even in hip-hop today.”

She added that she personally could relate to the story, explaining, “The entire struggle of being at the top of your game and then kind of losing it and getting an opportunity to do it again — like, I could relate to that.”

A powerful story of womanhood

Beyond the glitz and glam of music stardom, the show is ultimately a story of womanhood and the bond the four woman have with each other. In a recent interview, Eve opened up about the powerful themes of the series to ABC News. 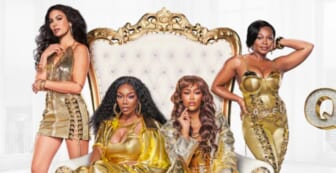 “You kind of see them in their womanhood getting back together, figuring out how to get back together,” she shared. “But it’s definitely about the music, but it’s also about friendship.”