“Any senator who cannot support the protection of voting rights in the United States of America cannot say that they support the Constitution,” the music icon said.

Stevie Wonder called out lawmakers on MLK Day for refusing to act on passing legislation on voting rights protection.

“Any senator who cannot support the protection of voting rights in the United States of America cannot say that they support the Constitution,” the music icon said in a video shared on Monday. “Stop the hypocrisy.”

“Cut the bulls–,” he said in the clip below.

“If you care and support our rights, do the hard work. You can’t please everybody, but you can protect all of us. And to keep it all the way real: The filibuster is not working for democracy. Why won’t you?” said the singer.

As reported by theGrio’s White House Correspondent April Ryan, the Voting Rights Act of 1965, which was signed into law by President Lyndon B. Johnson, has taken many legal hits since the United States Supreme Court gutted the law in two major decisions dating back to 2013.

This week, the U.S. Senate will hold a vote on efforts to restore the protections of the Voting Rights Act and also add more strength to it through additional federal protections.

This comes amid modern attacks on voting rights with states like Georgia and Texas passing voter suppression laws led by Republicans that will make it harder for Blacks and other minorities to vote. 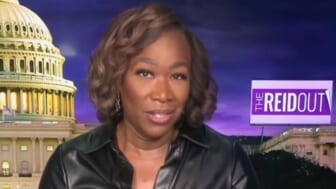 Many Republicans are opposed to national voting rights protections, but on MLK Day, they made time to share messages on social media lauding the legacy of the civil rights icon, theGrio reported. MSNBC’s Joy Reid wasted no time in calling out the hypocrisy.

The ReidOut host started her weekday show Monday by sharing some of those messages in a clip of several Republicans, including Sen. Tom Cotton of Arkansas, Florida Sen. Marco Rubio, Senate Minority Leader Mitch McConnell, Glenn Youngkin, the new governor of Virginia, and Sen. Rand Paul of Kentucky. Reid reminded her audience that in 2010, Paul stated he would have opposed many elements of the Civil Rights Act of 1964.

“You know, funny enough, that is exactly what the old version of the Dixiecrats said back during the 1950s and ‘60s,” Reid noted. “Oh, no one is being prevented from voting.”

“You just have to tell us how many jelly beans are in this jar, and you can vote. Just read this complicated passage, and you can totally vote,” she intoned. “Now, of course, we’re going to make sure your schools are awful and you’re barely even taught to read, let alone anything like this passage, but no one is keeping you from voting. The more Dixiecrats, interpositionists and nullificationists change, the more they stay the same.” 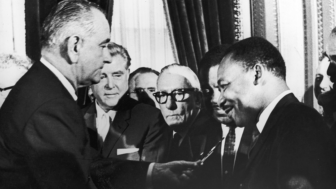 Meanwhile, there have been increasing calls to break the filibuster rule to get voting rights legislation passed. However Democratic senators Joe Manchin (W.Va.) and Kyrsten Sinema (Ariz.) refuse to support ending it.

“There is no better way to honor my father’s legacy than protecting the right to vote for all Americans,” said Martin Luther King III, son and namesake of the civil rights leader, in a public statement on Monday.

“The King holiday is historically a day of service, and we hope the United States Senate will serve our democracy by passing the Freedom to Vote Act and the John Lewis Voting Rights Advancement Act. We applaud Senator Schumer for his commitment to expanding voting rights, but we won’t halt our plans for action until legislation has been signed.”