Travis McMichael, a prosecutor said, once texted a friend saying he loved his job because “zero n——rs work with me.”

BRUNSWICK, Ga. — The three white men convicted of killing Ahmaud Arbery had histories of making racist comments or using slurs in text messages that stunned their friends and colleagues, a federal prosecutor told jurors Monday as the trio stood trial on hate crime charges in the 25-year-old Black man’s death.

During opening statements in the case, defense attorneys admitted their clients had each expressed offensive and indefensible opinions about Black people. But they insisted the trio’s pursuit of Arbery as he ran in their neighborhood was prompted by honest, though erroneous, suspicion that he had committed crimes — not by his race.

McMichael and his father, Greg McMichael, armed themselves and chased Arbery in a pickup truck after he ran past their coastal Georgia home on Feb. 23, 2020. A neighbor, William “Roddie” Bryan, joined the pursuit in his own truck and recorded cellphone video of Travis McMichael blasting Arbery with a shotgun. Arrests came only after the video leaked online two months later.

All three were convicted of murder and a judge sentenced them to life in prison last month.

Now the McMichaels and Bryan are on trial again, this time in U.S. District Court, where federal prosecutors have charged them with hate crimes that allege they violated Arbery’s civil rights and targeted him because he was Black.

Security cameras inside a nearby home under construction had recorded video of Arbery wandering inside, but never taking anything, several times in the months before his death. White people had also been seen entering the home, which had no doors or windows. Yet the McMichaels assumed Arbery must be a criminal and kept a lookout for him, prosecutor Bobbi Bernstein told the jury.

“If Ahmaud Arbery had been white, he’d have gone for a jog, checked out a cool house that was under construction and been home in time for Sunday dinner,” Bernstein said. “Instead, he ended up running for his life.” 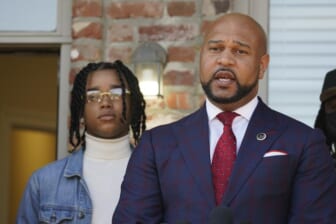 Bernstein said prosecutors will show evidence of comments by the McMichaels and Bryan that reveal a mindset that led them to suspect an innocent Black man of wrongdoing.

Travis McMichael, she said, once texted a friend saying he loved his job because “zero n——rs work with me.” Commenting on an online video of a Black man lighting a firecracker stuffed in his nose, he messaged a friend saying: “It’d be cooler if it blew the f—-ing n——r’s head off,” Bernstein said. The friend was taken aback by how angry McMichael sounded, she said.

One allegation never mentioned in the prosecutor’s opening statement was that Bryan told investigators he heard Travis McMichael utter a racial slur after shooting Arbery. The comment was widely reported after Georgia Bureau of Investigation agent Richard Dial testified to it during a June 2020 pretrial hearing in the state murder case. Travis McMichael’s attorneys denied he said it, and state prosecutors never brought up the comment during the murder trial. 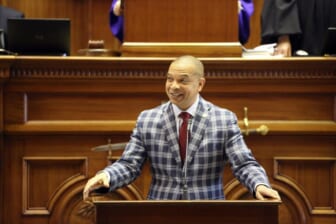 As for Greg McMichael, Bernstein said a former colleague of his will testify that McMichael responded angrily in a conversation about the 2015 death of civil rights activist Julian Bond, saying: “Those Blacks are all nothing but trouble.”

A jury of eight white people, three Black people and one Hispanic person was sworn in to hear the case Monday morning along with four alternate jurors. Judge Lisa Godbey Wood and the attorneys disclosed the panel’s racial makeup in court. 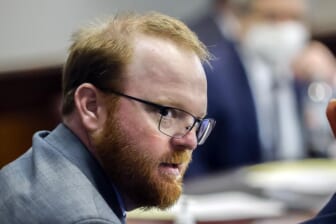 Attorneys for the McMichaels and Bryan acknowledged that their clients had made racially offensive remarks. But they urged jurors to decide the hate crimes case based on facts rather than the raw emotions such words may stir.

“I’ve heard the N-word more today than I’ve heard it in the past three or four years, and we haven’t even heard any evidence yet,” Bryan’s attorney, Pete Theodocion, told the jury.

Greg McMichael’s attorney, A.J. Balbo, said his client initiated the pursuit of Arbery not because Arbery was Black, but because McMichael recognized him from security videos as the man who had kept entering a neighbor’s unfinished house. 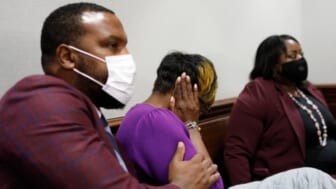 “Greg didn’t know the name, but he recognized the face,” Balbo said. “There was no mistaking who has just run by him.”

Theodocion said that Bryan joined the chase assuming Arbery had done something wrong because he saw Arbery run past his house with the McMichaels in pursuit, yelling for Arbery to stop.

Copeland, Travis McMichael’s attorney, said evidence will show he “was in shock” after shooting Arbery at close range as Arbery threw punches and grabbed for the gun.

“You’re not going to hear any evidence that he was pumping his fists, that he was gleeful,” Copeland said. 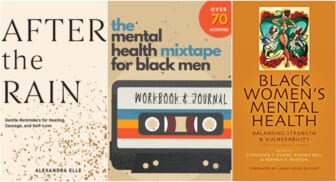 The judge said she expects the hate crimes trial to last between seven and 12 days.

In contrast to the federal trial, the jury in the state murder trial of the three defendants last fall was disproportionately white, drawing objections from prosecutors and complaints from Arbery’s family. The state judge allowed the panel to be seated after defense lawyers stated nonracial reasons for striking most Black jurors from the pool.

Arbery’s father, Marcus Arbery, told reporters outside the courthouse in the port city of Brunswick that he was “very pleased” with the federal jury.